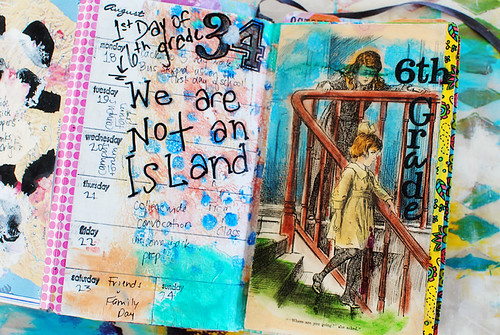 Week 34's challenge for The Documented Life Project was to "fill the page with numbers that relate to your week." The most important number for us that week was six, as it was the FIRST WEEK OF SIXTH GRADE!  That was really the only number I could think about that week! 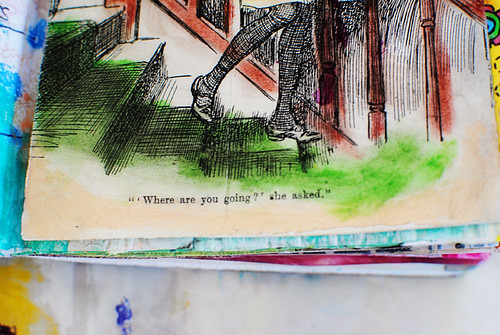 I used yet another scrap from my sidekick for the tip in, a page from an old book. It seemed perfect for our week of starting middle school, with the two young girls and the question on the bottom: "Where are you going?" she asked.  I added color to the page with Faber Castell gelatos.  I love the creamy consistency of the gelatos. 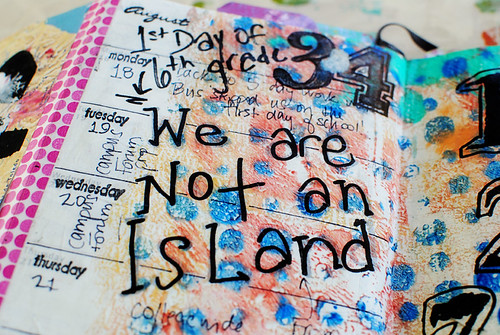 On the interior spread, I started with a piece of deli paper under paper scrap and then grabbed my big numbers stencil. And here would be where I made my mistake. I used black gesso and a makeup sponge to stencil the numbers, and you can see that I probably should have gone with actual black paint, which would have been thicker and stenciled a bit cleaner (click on pictures to enlarge). But lesson learned!  I journaled that lesson on the page as well. 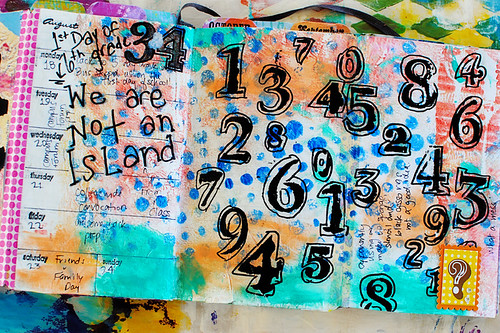 There's a funny story behind "We are Not an Island."  This actually came from the exercise I struggled with the most in Orly's class at An Artful Journey.  I won't go into much detail about the specific exercise so as not to spoil Orly's class if you ever have an opportunity to take it, but suffice it to say, we were talking about islands. The classmate next to me, and I can remember her pretty face as plain as day but can't remember her name, was struggling as much as I was, so she reached over and wrote this in my sidekick.  We both tried very hard not to burst out laughing!  It was actually a little bit of serendipity that this shown through so clearly from the back of the sidekick pages I used in Week 33, so I just brought it out strongly with a black Sharpie as a fun memory.

Thanks for stopping in today!  I hope you have a wonderful weekend and get to spend some time enjoying what you most love.  See more Documented Life posts here.
at September 26, 2014