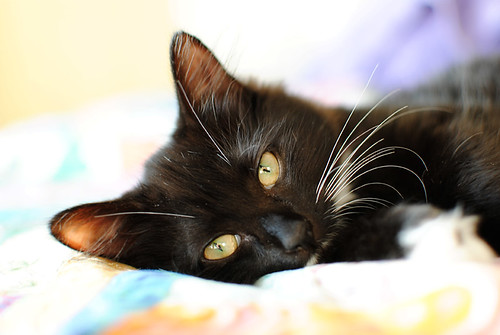 We failed again.  At fostering, that is.  Zoey officially became our latest foster failure a couple weeks ago.  After everything we had been through with her, we just couldn't let her go.  She's proven to be the perfect pal for Pete, and we knew he'd be lost without her.  After being so tiny for so long, Zoey finally had a major growth spurt and she's a little chunker now.  As you can see here, she's also quite the ham for the camera.

I realized last week Zoey was sent by an angel. Benny and I were laying in bed watching TV, and Zoey hopped up on the bed, took her spot on my chest, and started purring.  That's when it hit me.  I looked at her and said, "Zoey, Savannah sent you, didn't she?"  She looked at me wisely, and I swear I saw a tiny little barely perceptible nod of her head.  I realized that Zoey has all the same little habits that Savannah did with me (and neither Pete nor Tink do).  She sits on my chest and falls asleep, she follows me around the house, she sits at my feet when I'm washing my face and brushing my teeth at night, and as we took her into the vet this morning for her kitten shots, she sounded exactly like Savannah sounded when she was unhappy with me. :-) She's even getting longer fur and has the same little lion's mane Savannah had.  So I guess we were meant to be, little Zoey and me.  Thanks, sweet Savannah.

Email ThisBlogThis!Share to TwitterShare to FacebookShare to Pinterest
Labels: animal rescue, Behind the Camera