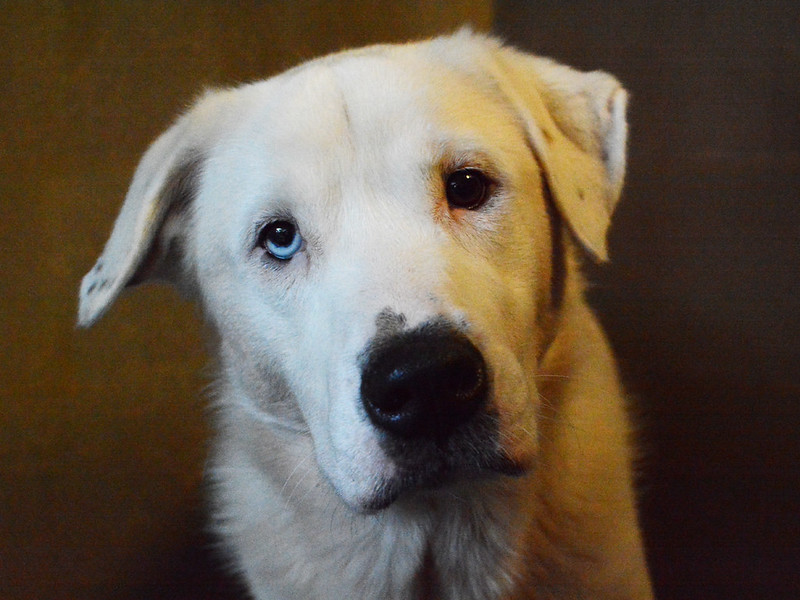 Meet Weaver. I've been photographing shelter dogs for going on seven years now, and sometimes there are those dogs...dogs like Weaver. Gorgeous, isn't she? She was also incredibly scared in the shelter. I didn't get a chance to look her up in the system before I left the day I took this photo, but my guess is she was an owner surrender. As a Lab/Golden mix in perfectly healthy condition, highly likely she did not come into the shelter as a stray.

When I came to Weaver's kennel, she was on the far side of her kennel, in the inside portion. At the Tallahassee shelter, the kennels have both inside and outside access, with a guillotine door in between. I take the dogs out from the outside. When I opened her kennel door, she peeked around the corner at me, but she stayed glued to her Kuranda bed (a raised platform bed made out of canvas and PVC pipe). I closed the kennel door and sat down in the outside portion of the kennel, reaching through the guillotine door to pet her. Poor thing was shaking like a leaf. I sat there with her for about 20 minutes trying to coax her over to the other side, but no dice. I let her rest for a while and went on down my list of others who needed photographs that day, but when I finished, I came back to Weaver's kennel to sit with her some more.

When I sat back down the second time, I had some treats with me. After a few nibbles, she finally  came over to the outside portion of the kennel where I was sitting, but even though she let me put the leash on her, she wasn't budging. She would continue to take treats, though! So there we sat, Weaver and I, having a conversation over Pupperonis. And though I couldn't convince her to go outside and enjoy a little grass and sunshine, she did let me take her photo. Thankfully, she was adopted before the end of the day that day.

Lesson here? A couple, I think. First, yes, you can find a variety of dogs at your local shelters, not just bully breeds (though I will say for the hundredth time, Pit mixes and other bully breeds are often some of the most awesome dogs and are almost always my favorites of the day!!!). And second, dogs come into the shelter in all sorts of mental shape as well. Most often, you don't know their background.  But you can know their future by giving them a chance to have a loving home with you.  Give them time and space to warm up to you, and you'll be handsomely rewarded.
at December 17, 2018

Email ThisBlogThis!Share to TwitterShare to FacebookShare to Pinterest
Labels: animal rescue, Behind the Camera

Sweet! You do amazing work...
Cindi

Such a wonderful thing you do for those animals!
Cindi
❤️