A story popped up on my Yahoo homepage early this morning that really troubled me. You may have seen it on CNN as well. It was about the Delta Zeta sorority chapter at Depauw University, where 23 members of the sorority were asked to move into alumnae status because, they allege, nationals felt they did not fit the new image the chapter wanted to present. These 23 young women felt they were placed into one of two categories—overweight or otherwise unattractive, or a minority who didn’t fit in. Of course, the national office gave other reasons for the action, so only those directly involved in the situation will ever really know the truth; the sorority is being reprimanded by the university regardless. You can read the story here. 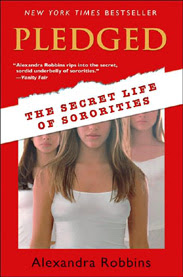 This story caught my attention for two reasons. I just did a search on Amazon to confirm my first suspicion. I entered “sorority” into the search line and up popped dozens of books, both fiction and non-fiction. Unfortunately, most of them painted sororities and fraternities in a negative light. The most recent book highly publicized by the media at the time was Pledged: The Secret Life of Sororities, by Alexandra Robbins, pictured here. Robbins went undercover for the 2002-2003 academic year to investigate the inner workings of sororities. I remember when this book came out, and it sparked my interest at the time, but I never picked it up. Reading the reviews on Amazon now, I’m glad I didn’t. The reviews come from those who’ve participated in Greek life and from those who haven’t, and the disparities, for the most part, are telling. You can read them here.

So is it human nature to attack things you really don’t know much about? Things you consider “secret” or, for whatever reason, aren’t a part of? It seems so in instances like these. So, yes, as you’ve probably already guessed by now, I am an active alumnae member of a Greek organization, the largest female Greek organization in the country for that matter, Chi Omega. Stories like this Delta Zeta issue and books like Robbins’ book do trouble me, because I fully agree that sororities and fraternities are unfairly criticized. For the most part, sororities and fraternities are painted in a negative light by the media, and very wrongly so. Yes, I agree that there is quite a bit of partying, drinking and the things that sometimes follow in Greek life on college campuses; just like there is quite a bit of partying, drinking and the things that sometimes follow on college campuses in general. That’s not “Greek life”; that, unfortunately, is a part of “college life”, Greek or not, on the majority of college campuses in this country. It is a positive part? Of course not, but it’s a fact. What’s also a fact of life on college campuses, one that’s so very rarely reported, are all the good these organizations do, both for the individual members themselves and through the groups’ philanthropic efforts.

Through sororities and fraternities, members learn valuable life lessons. They learn leadership skills, they learn study skills, and they must maintain high academic standards. They learn social skills and how to get along with others they may not normally interact with. Heck, put 40-50 girls living under one roof and see how quickly they have to learn how to get along! Sorority members are not cut from some secret mold. I know that within my sorority, we had all shapes and sizes; we weren’t all thin blondes, as one of the stereotypes goes. Greeks learn how to deal with life in general in a supportive, structured environment that strives to prepare them for success in their futures. Furthermore, they learn the value of community service and volunteerism through their philanthropies. And through that, they learn that every one, no matter their size, ethnic background, color, creed, class, ability or disability, can add something of value to this society.

Can students who don’t participate in Greek life learn these things as well? Certainly, it just takes making an effort to get involved on their campus. (Oh Lord, I think I’ve just stepped up onto my Student Activities soapbox :-). Greeks are involved on their campuses. But my point is, all areas of campus life are exposed to, and may participate in, those negative influences, not just Greeks. We can only hope that they all learn from their experiences, both positive and negative. Wouldn’t it be nice if the media tried to concentrate solely on positive things, just for one day? Sure, that’s not going to make the world’s problems disappear, but it sure would go a long way in reminding us that not everything is doom and gloom. Put on your happy feet and dance once in a while.

One last note: I guess the main reason this really grabbed me is that I’ve been getting more involved in my local alumnae chapter, and last night I had dinner with four other Jacksonville area Chi Omega alumnae. We ranged in age from early 20’s to early 40’s; we were all different sizes, different backgrounds, and different experiences, yet that main Chi Omega commonality brought us to that table and we talked like old friends for more than two hours, with never a lull in the conversation. That’s what Greek life can do: those connections that can be made down the line simply because when you were in college, you pledged the same sorority or fraternity, not at the same time, not even at the same university, but just the same Greek organization that has a strong national presence, like so many do. I wouldn’t trade that or the experiences I’ve had thanks to my involvement in Greek life for anything. And you can bet your bottom dollar that I’ll be encouraging my daughters to do the same when they go to college.
at February 28, 2007

Hello Kelly!
My sister, Aubree Hershorin, sent this blog to me and I wanted to compliment you on your insightful view of the Greek system. While Aubree was a Chi Omega, I pledged Kappa Alpha Theta at my college. I also feel the same strong connection to my sorority and I think that it definitely is something you have to be a part of to truly understand, sad as that is. I try to explain to my "non Greek" friends, even now 8 years later, and no one seems to get it unless they went through it. We can continue to try to educate though. Thanks for your thoughts!

Thanks so much for your comment, Marnee! I'm glad you enjoyed it.