Well, I have to admit, I've had one heck of a week. I've been dealing with a student at work who I've been trying to help work through some personal issues (oh...for many weeks now) and, after a very attacking email I received from her Friday morning, I've finalized realized I will never be able to help her, and I'm hanging up my hat on that one. It's discouraging, as I know that I have a gift in working with students, but I just couldn't get through to this one. My sweet Uncle Earl died Wednesday; he was my granddaddy’s brother and was a warm, endearing man loved by all who met him; he will be greatly missed. I’ve also been dealing with additional fallout from my mother's death, seven years ago. Definitely not fun stuff....all I can really say is that we'll have to get a lawyer involved at this point. 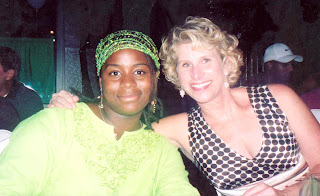 However! As the old saying goes that "into each life a little rain must fall", I was reminded Friday afternoon that there are also angels walking on earth to dry up that rain. I think my earth-bound angel is Olympia Milton. I met Lymp three or four years ago, when she was hired as a Student Ambassador in our office. It was right about the time I went out on maternity leave, so I really didn't get a chance to get to know her very well at first. But I certainly heard about her. Jodi, my staff member who was Lymp's supervisor, constantly raved about her in emails to me. Once I came back to work in January 2004, I quickly agreed with Jodi's assessment. Olympia was just a breath of fresh air when you really needed it. Very warm and friendly and thoughtful, on top of being very creative and great at the position we hired her into, she gave the best hugs. At the end of that semester, she decided to run for Student Government Association (SGA) president and was easily elected. I thoroughly enjoyed working with her and had two more years with her as my president.

Last spring Olympia graduated, but we've stayed in close touch ever since. She's currently finishing up her degree in a social services area at the University of North Florida. She and my husband both now jokingly refer to her as our "Black Sheep of the Family". The picture above is of Lymp and me at a restaurant in Little Italy in NYC, where we attended the APCA Leadership Conference. So back to this whole angel on earth thing. Friday was particularly rough. I had received that nasty email from the other student in the morning, and I was back and forth on the phone dealing with the issue stemming from Mom's death all day. Uncle Earl’s viewing was Friday night, followed by the funeral on Saturday morning. About 2:30 Friday afternoon, I received an email from Lymp with the subject line "Thoughtful Note". I hadn't talked to her in a few weeks, so it was a nice surprise. She told me she had been reading my blog (that was a surprise, too, so I guess she'll eventually see this!) and that she just wanted to take a minute to tell me what an inspiration I have been to her ever since she met me. She referred to my post in which I mentioned how hard it's getting for me to travel now, since I miss my girls so much while I'm gone, and went on to thank me for all the time I spent with her on those trips and what they meant to her. She felt she learned so much and was able to become the person she is now because of those trips and the times she's spent with me. While Lymp was my president, my entire board was female, and they nicknamed themselves "Kelly Girls". Lymp said she proudly wears that title to this day since to her it means "being a sophisticated, classy, beautiful woman who raises standards and believes in setting the bar high while also helping others reach that same bar". Talk about perfect timing! At the moment that I truly needed something to brighten my day, up pops this note from Olympia. Now tell me she's not my angel. She's often told me that I am a second mother to her and sometimes signs her notes to me as "Olympia Milton Warren". :-)

I know that I am blessed. I can have some pretty crappy days, and even pretty crappy months, and I've been through some very traumatic events that I would not wish on my worst enemy, but still, I know that I am blessed. I have a wonderful husband, two incredible little redheads, and very special friends and family members (my all time favorite is my 85-year-old Aunt Livy, who my Olivia is named after). I know that even though I also have bad days at work and often have to deal with some unpleasant situations, we all do, and I'm lucky to work in a field that, overall, I truly enjoy. Simply because of people like Olympia. I've had the honor of working with many outstanding students over the years that I've gone on to develop lasting friendships with...like my very first SGA president, David Lapinski, who after 10 years in the finance industry decided that he learned more and was happiest when he was involved on campus as our SGA president. David's now gone back to school and is finishing a master's degree in student affairs so he can do what I do (in addition to expecting his first child with his lovely bride, Ashley!). 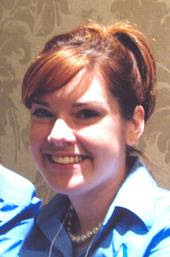 There are many others: Whitney Pritchard, who like Lymp, is like a daughter to me, and is now my official assistant at all my arts festivals; Brittany Jowers, a former SGA president and great friend of mine who's now in her last year of earning her doctorate in Pharmacy (my only beef with Brit, and David for that matter, is that she went to UF, my Seminole's arch rival :-); and I have a feeling my current president Heather Peck will also become one of those that sticks with me. Heather will graduate this summer, but I've really enjoyed the time I've had with her, and we've had some really special talks about life in general. That's Heather to the right.

I know that there are friends I work with who sometimes read this blog. I hope my friends across the state that have the chance to work with wonderful students like Olympia will take a minute to reflect on all that they've gained from those special students. When you're having a bad day, dealing with a student that is driving you insane, think about those students like Lymp. And for those of you that don't work in education, I'm sure there are people who've crossed your path that have had a positive lasting impression on you. Maybe one of them is your angel on earth.

Email ThisBlogThis!Share to TwitterShare to FacebookShare to Pinterest
Labels: Behind the Camera, Living Life's Lessons, My Favorite Posts