The Weather Gods of San Marco

So, did I jinx myself by sharing the story of my very first Springtime Tallahassee in my April 5 post? How ‘bout that weather this weekend? Whether you were here in Jacksonville or anywhere on the east coast, this storm has been something….and it came through Jacksonville half way through the 14th Annual San Marco Arts Festival. Add to that a few other misadventures and we had a very interesting weekend. 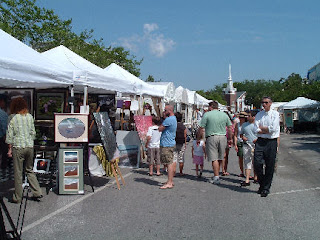 The day started Saturday with an early morning call from Whitney telling me she had just spilled grape juice all over herself (and the inside of the car, which I’m sure brought forth a few choice utterances…), so she had to go back home to change. Once we both got to the festival site and started to set up, the first injury happened. (Yes, that’s a clue that there was more than one.) As we were setting up the tent, I had a little mishap. You know that fleshy part of your middle finger just above where your finger attaches to your palm? I know you’re looking at your finger trying to figure out where I’m talking about….I’ll give you a moment :-). Found it? Now, imagine that that little space gets caught between a metal pole and a sliding bracket that slides up that pole and locks into place. You with me? Once caught, and I mean caught, stuck like glue, finger-in-a-vice-like-white-on-rice kinda caught…I was literally attached to the bracket by my squeezed, screaming flesh…I said “Whitney, Whitney, Whitney, help me Whitney, now Whitney, WHITNEY!”, apparently loudly enough that Steve, our resident parks and recreation electrician who was about ten yards away setting up power, ran over, saw what happened, said “Holy S*%t!”, and pushed the bracket up while pulling my hand away. Luckily, Steve had a first aid kit on his truck and cleaned and bandaged it up for me. It’s now a lovely shade of purple but at least it’s still attached. I've spared you the picture and just shared this love picture of Saturday's shoppers instead (above). 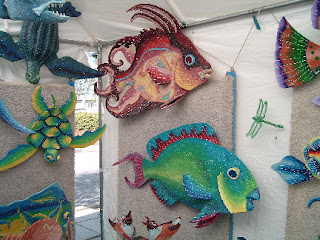 So the rest of the day Saturday was fairly uneventful, and even with my throbbing hand, we managed to make some great sales. (My neighbor Jenny Stine did great, too! These are her fish. Love her work and want to contact her? Email me. She doesn't have a website.) By the end of the day Saturday, word had started to spread about the coming storm and nearly half the artists packed up; whether or not they planned to come back the next day, who knows? We decided we were sticking it out, so we weather-proofed as much as possible, said a little prayer and went home. I guess the storm hit about 5am Sunday morning...well I guess I should say started hitting about 5am. Finally stopped raining about 9:30, so we headed back down to see how we did, and yeah!, we were still standing, and thanks to the industrial tarp we threw over everything inside the tent, dry! 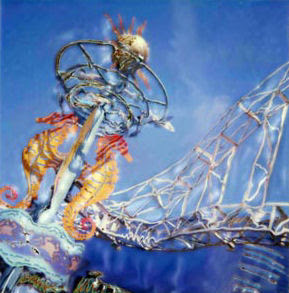 But then there was the wind…..so, I told you about the wind at my first Springtime, right? Well, this was most definitely worse. And again, beautiful blue skies after all that rain cleared out, but wind, wind and more wind. Saturday morning, there were 102 artists’ booths. Sunday morning, there were 54 artists’ booths. By 1:30pm Sunday afternoon, we were down to 18. But we stuck it out! Then about 3:30 pm, we got a very large gust of wind and Heather Blanton’s tent next door quickly started leaning to the left…which is where we were! Whitney and I both jumped up and pushed, while Heather and Ryan grabbed the other side and pulled. (That's Heather's work above; contact her here.) And here’s where injury number two came along….as I was trying to save Heather’s tent, one of her paint cans filled with sand fell, taking out my right index finger on the way down…the middle finger injury from Saturday morning was on my left hand. Once the can passed my finger, it apparently landed on my right foot. I say apparently because I was in so much pain from my finger that I didn’t feel my foot at the time, but judging by the lovely purple and red strawberry and soreness on the top of my right foot today, that is my theory.

So we helped Heather break down her tent, and then guess what that meant? We quickly realized that Heather’s tent had been blocking a great deal of wind from our tent, and once Heather’s tent was gone, well, I think you can imagine what happens to a jewelry display tent in 30mph steady winds with 40-45 mph gusts. We grabbed the tent first and got it down (now, keep in mind I have four 25 pound weights for my corners, and for this show we added two 55 pound barbells to the side that was catching the most wind and we were STILL blowing away). Then we quickly went to work getting the jewelry put away. Thankfully, as small as jewelry is, it doesn’t have much wind resistance so the jewelry itself blowing away (short of some earring cards) was not the issue….however, the necks the jewelry is displayed on made rather lovely little black kites! Over all, I lost one piece of jewelry to breakage and a few pairs of earrings. Not too bad at all given the situation. 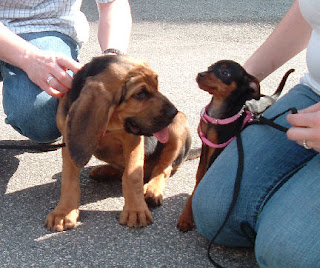 Trying to get everything packed up in that wind was also rather entertaining…and was the cause of my last injury. As I was folding up one of my chairs, it also caught a big gust of wind and one arm lunged itself into my collarbone, leaving me with yet another lovely purple abstract work of art. I mean, come on, I’ll admit I’ve always bruised fairly easily, but today I look somewhat like a Van Gogh painting. When I woke up this morning, I felt like I had been run over by a truck. The highlight of our day Sunday was the visit from Casey and Audrey, having a little conversation in this picture. Through it all, no matter, we still had a great time and now have another interesting show story to add to our adventures. Always something! Next stop is the 1st Annual St. Johns Town Center Arts Festival, April 28-29. Come see us!