The Emergency Rescue of Boxley Bobley 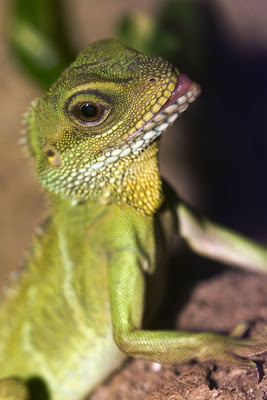 Having two cats who like to hang out on the back deck, I've become very adept at rescuing lizards out of the jaws of stalking felines, and I'll admit, I did this on a regular basis even before I had children. But the rescue of a lizard today tops the list of lizard rescues in this family. (I know, I know, I bet you never thought you'd read about anyone rescuing a lizard on a blog, but there's a first time for everything.)

The little ladies and I went to Publix this morning, and Livvie quickly noticed a little lizard hanging out under the buggy they were climbing into. They went for the extra large (read, extra-cumbersome) model with the two blue seats today. I oooh-ed and aaah-ed over the lizard and then we went in. Well, as we were cruising down the cereal aisle, who, would you imagine, popped up!? Well, Boxley Bobley, of course, the name Sarah quickly gave our little lizard friend. He was hanging eight on the front of the cart checking out the Honey Nut Cheerios.

At first I thought we were going to be okay...BB seemed to be enjoying the ride...but soon he started looking a little stressed. Don't ask me how I know when a lizard is stressed; trust me, after rescuing hundreds of the little reptiles from the jaws of Kitty and Savannah, I know the look! Sarah and Livvie were very concerned. I went forward to check him out, but he darted into the little advertising box on the front on the cart. Problem solved, I thought, and told the girls he'd be fine now, safe behind the "Find all your Publix brand paper goods on aisle 12" picture.

But then he popped back out, gave me that look I've seen so many times peering from behind a mass of gray and white whiskers, and I knew we had to attempt a rescue. So moving slowly and talking softly to little Boxley Bobley, while Sarah and Livvie held their breath, I managed to catch him on the first try. Turning the extra large cart around with one hand while holding little BB safely in my other proved to be a larger challenge. Those things are as long as the aisles are wide. Anywho, we made the turn and headed for the door, with Sarah and Livvie telling everyone we passed that we were rescuing a lizard. Well, better than having him peek out from behind your English muffin bread, don't ya think? I let the girls have one little goodbye peek at him and let him go...and he actually was a bit slow to take his leap to freedom, turning to give me a grateful wink before he went on his way. (I am not making this up...I told you, after rescuing all those lizards from the cats, I think they have a network on which they've spread the word about my lizard life-saving skills.)

Now, if we could only get to those birds that fly in and up into the Publix rafters...