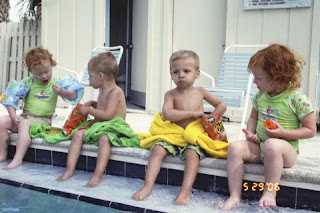 Well okay, I feel like I live in paradise already, but we're headed off to our annual vacation to a very, very special paradise. My family has rented a place on the beach in Boca Grande every Memorial Day week since 1979, so yep, that means this year is our 28th year, if I'm doing my math correctly (I am not a math person...and speaking of math, my dad is still kicking himself to this day for not buying a place down there in 1979, when you could buy a place on the beach for $125,000, instead of the $3 million they go for now). In 1985, I started taking a group of friends down there with me every year (this is normally very much a group vacation type thing), and in 1995, my DH and I got married there in a tiny little church that only held 70 people. We had 62 guests there with us for the weekend, a third of whom were skinny dipping in the Gulf after the reception, but that's a whole other story... We live by the Jimmy Buffett song "Growing Older But Not Up". :-) 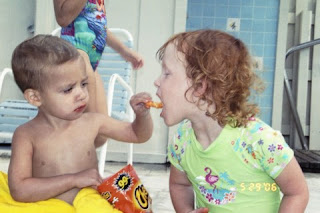 Last year, my friend Susy and her husband and twin boys came with us. Adrian and Christian are six months behind Sarah and Livvie. So how's your math? With Adrian, Christian, Sarah and Livvie, that meant we had four toddlers under the age of three under one roof. Yes, the guys thought Susy and I were insane, but they still showed up. And though chaotic, we had a great time. These two pictures are from a series of shots I took at the pool of the double doubles last year (yes, there was that whole "spend a wad of dough for a house on the beach...never see the beach because you spend all your time at the pool....priceless" Mastercard commerical going on there--this year we WILL spend time on the beach, but I digress). The boys were feeding the girls Cheetos. As you can see in the second shot, Olivia was totally enjoying being treated like a queen by Adrian (Susy and I have already set the wedding date).

Anywho, I'm testing my blogging skills this week. I have attempted to set up a couple posts highlighting some of my favorite recent Etsy finds set to post automatically throughout the week while we're gone (note the emphasis on the word attempted) and if I need a break from the DH and girls down in Boca, I'll sneak off to the Community Center and check in on you all. Have a great week and don't forget to sign up for this week's Free Bling while I'm gone!