The Legend of "The Skip"

Do you like to bowl? I won’t say I’m a regular bowler, but I did spend some time in church bowling leagues growing up. These days, I may bowl once a year if that, but I’ve never lost my signature “skip”. Not sure how the skip developed, but I just know that if I attempt to bowl without the skip, I fall flat on my face, literally. 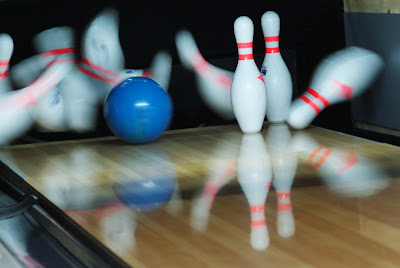 I mentioned earlier this week that I facilitated a leadership retreat for our state student government association executive board this past weekend. Traditionally, we take this group bowling as part of their teambuilding activities on Saturday night. I haven’t directly trained this group since my girls were born, so this was actually the first time I’ve been bowling in about five years. So while I barely managed to break 100 each game (100 and 111 to be exact), one thing had not changed: the skip. One of my students is this year’s president so I warned him of the skip before we even left campus and told him that ridicule would not be tolerated (after all, I signed his scholarship form…). To my surprise, however, there were quite a few in our group who tried to imitate the patented Kelly Skip instead, to great failure I must add. If the skip doesn’t come naturally, you’ll trip yourself up if you try it, and I witnessed that quite a few times. One of our students videoed the skip and the strike that followed it (one of very few of the night!) and promised that it would make it to You Tube. My own personal 15 minutes of fame...I’m scared.

About half way through the day Sunday, Jim and I facilitated an exercise on communication skills that uses the good-old-fashioned telephone game as its base. It’s called Rumor Clinic. The official story that comes with the initiative is a rather boring accident report, so we tend to create our own stories, the more outlandish the better. Since I had been jacked up on chocolate most of the day (and didn’t get to bed until about 1am the night before), I came up with this story: Last night at the bowling alley, Dennis tried to emulate Kelly’s skip but fell flat on his face, ripping his pants and breaking his arm in the process. Matt attempted to take Dennis to the hospital, but in his haste could only find a veterinary hospital that specialized in large animals. After the vet set Dennis’s arm in a cast, Dennis returned to the hotel, mooing like a cow.

The object of Rumor Clinic is to relate this story one person at a time to the next person in line, who hasn’t had the benefit of hearing the previous versions, so as you can imagine, what you start out with and what you end up with are invariably two very different stories. Somewhere along the line, Dennis became Hazel, who tried bowling in her brand new stilettos, which caused her to trip, get the ball stuck on her hand and fly down the lane face first, only to have the pin-setter bounce up and down on her. Then someone switched Hazel to Kaia, who was wearing those stilettos to impress one of her new boyfriends, and after the pin-setter came down on her she really needed a hug. This lasted for a few people while Kaia received lots of hugs. Then the last person didn’t know that a pin-setter was the actual contraption that reset the pins and thought it was a real person, the stilettos disappeared, and the story ended up as a bowling alley employee beating up Kaia for no known reason, and she no longer got hugs. Whew! Granted, I think we had some embellishments along the way, but I hope you can imagine how funny this was.

To give you an idea of the characters, Dennis is the state advisor and a very close friend of mine, Hazel is our district three advisor, very adorable in her early 50’s but not someone I’d ever see wearing stilettos, Matt is our student district two coordinator, and Kaia is our student vice president, and the one who truly brought out the best embellishment. The object of the initiative is to talk about how “rumors” get started and how they can adversely affect an organization...mooing cows, stilettos, possessed pin-setters and all. And to think I get paid for this. :-)