Visiting New York City for the first time can definitely be an overwhelming experience. Though I’ve been half a dozen times over the years, the students who attended the APCA conference with me this past weekend had never been, so it was fun seeing the city through their eyes for the first time. In addition to dutifully participating in all aspects of the conference, we did all the usual tourist things…Staten Island Ferry, Central Park, Metropolitan Museum of Art, Empire State Building, Rockefeller Center, Chinatown, World Trade Center site, etc…and stayed smack dab in the middle of Times Square at the Marriot Marquis. While I wouldn’t recommend staying in Times Square, it’s definitely a unique experience! 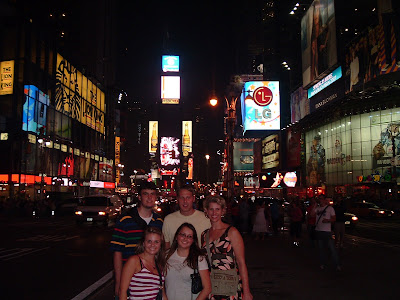 I think what I most enjoyed about this trip was seeing the city through the eyes of my student Emily Dale. That’s Emily there in the front left in this picture of us in Times Square after several hours of walking the city Monday night. It was interesting listening to all of them talk to each other about what they were seeing and hearing the questions they asked me, particularly regarding some strange (but normal for NYC) sites on the subway, but I think the one conversation that really sticks out in my mind was one Emily had with her mom via cell phone while we were walking through Times Square. Because of the general noise of the city, she had to yell on the phone so we could pretty much hear every word. :-) To the best of my memory it went something like this: “Mom! We went to Chinatown tonight! And they have all these little secret back rooms where all the really good stuff is! And Hailey and I got to go back there, Mom! It was awesome! I got a Dolce and Gabbana bag for $25, Mom! TWENTY-FIVE DOLLARS! And it’s real! [oh the naivety of a 20-year-old girl on her first trip to the big city….] And I got a Tiffany necklace for you, the exact one you wanted, Mom! And I got my friend a Chanel bag from one of the street vendors down by the Bodies exhibit! It was so cool! They had all their purses wrapped up in a big sheet and they just layed them all out on the sidewalk for you to pick them out! I got her Chanel bag for $32, Mom! I totally blew it out of the water! I keep telling Jeff [another one of our students there] that we need to buy a bunch of bags up here and then take them home and sell them on the internet! We could call it knockoffs.com! Ms. Kelly tells me that would be illegal but I have a lawyer friend who I’m going to ask about it. I was kinda wondering because when we were buying the bags off the street, the man selling them kept looking around like he was watching for someone to come or something. Anyways, Mom, I totally slayed the shopping. This place is sooooo coooool!” 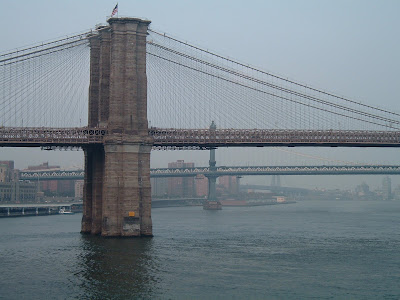 Brooklyn Bridge pictured here....As for me, yes, I did break down and buy a couple things in Chinatown myself: one Dolce & Gabbana knock off tote bag and one Tiffany knockoff necklace. I was actually pretty impressed with the quality of the bag when I thoroughly examined it in the hotel. Good quality leather on the exterior, though the interior fabric is a bit flimsy. Of course, the D & G metal emblem popped off while we were waiting for our shuttle bus back to long term parking once we got back home to Jacksonville last night, but it was an easy fix this morning. We’ll see if my neck turns green the first time I wear the necklace. The students did have an interesting conversation with a couple of our van mates from the Marriot to LaGuardia though. One of the gentlemen sharing the van with us was wearing an NYPD t-shirt, so Emily asked him about her knockoffs.com idea and whether or not he thought it would be illegal. Though just a tourist who bought an NYPD t-shirt, he did offer his professional opinion and told her it probably was. One of the other riders did make an interesting point, though, and I had to agree with her. Yes, selling those bags on the street is illegal, yet the cops tend to turn a blind eye to it most of the time; at least the Chinatown vendors are actually running a real business with a store front (in addition, of course, to their back rooms). But when it comes down to it, one of my students pointed out that illegal or not, the money used to purchase those bags goes back into the economy in the long run anyway (no, we aren’t going to get started on the long rumored debate that those sales support terrorism…the jury is still out on that). Moreover, as our fellow rider pointed out, the average person who buys a street bag is not taking any business away from Dolce & Gabbana, Coach, or Louis Vuitton because they cannot afford to purchase the real thing anyway….and the type of individual who can afford to purchase the real thing is probably not going to purchase a street bag, so we are really dealing with two different markets. Interesting observation, huh?

Anywho…I had a couple other interesting observations this trip. First, I would not bring small children to New York City, particularly to Times Square. Yes, I understand that children can get lost or taken anywhere, even from their own backyards, but the sheer mass of humanity in such a densely crowded area makes that so incredibly easy I was scared to death for every child I saw, particularly when they themselves looked terrified by the crowds surrounding them and the realization that they could so easily get separated from their parents. I also wondered what life was like for the children of those street vendors, one of whom I saw sleeping in a stroller next to who I suppose was her father selling illegal DVD copies on the street corner. 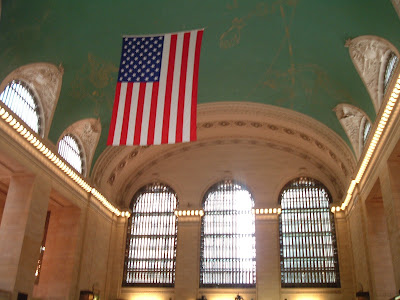 Grand Central Station pictured here...The other thing that really fascinated me yet again this time was the homeless, the mentally unstable, and the drug addicts that roam the city. There were so many times when I wanted to walk up to one of them and just have a conversation with them…ask them how they got there. I had a woman sit down next to me on the subway who was definitely high on something. Her clothing was fine, but she was extremely fidgety. When walking onto the train, she had stood behind Emily and just kinda kept shaking her arms until Emily moved out of the way. When she sat down next to me, my group all looked at me, wondering if I was going to be okay or if I was going to get up. I didn’t get up. To me that would have been a slap in the face to that woman, who obviously already had some major issues and didn’t need another slap in the face. We were on a train full of people and she was harmless. The next day, we saw one woman just laying on the ground with a blanket over her and people just walked by her like she wasn’t even there. This was on 5th Avenue in broad daylight. This was my 6th trip to NYC, and scenes like that trouble me every time. Does the city harden residents so badly that they don’t even see those people? It saddens me. Walter, Jeff and I were talking about it while we were waiting for our flight, and maybe because Walter and I are a little older we definitely had a different view on it. We know we can’t save the world, but we also think that more could be done to help these people, at least the ones who want to find a way off the street. Jeff came around after a while when Walter talked about the fact that our current government couldn’t find any money to help education or social service programs yet it could find billions of dollars to go fight someone else’s war. Even though he is a veteran, Jeff said he had to agree with that. Not to get on my soapbox or anything…

If you’ve never been to New York City, go, at least once. Window shop 5th Avenue, grab some bargains in Chinatown, catch a show in the theatre district and have a milkshake at Junior's just off Times Square in Shubert Alley. I’d love to go back every year for a dose of the big city. Maybe I’ll start taking my girls there yearly when they get older. We could do some shopping, see some shows, let them experience life in the big city (and pray they don’t want to move there!), just the girls. That’s definitely something to look forward too. Have any great NYC memories? Click on the comments box and share them!

Email ThisBlogThis!Share to TwitterShare to FacebookShare to Pinterest
Labels: Behind the Camera, Living Life's Lessons, On the Road Again..., Playdates of All Kinds