My (winning!) entry for this week's Creative Construction weekly contest... 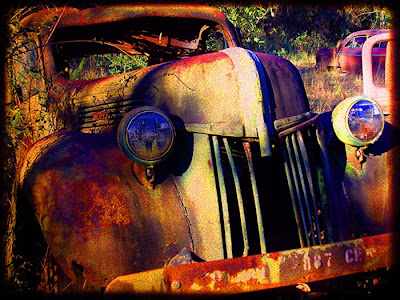 Clock’s Tickin’—Heading south out of Tallahassee on U.S. 319/98 towards the coast, there’s a gathering of old trucks just off the side of the road. Being the intrepid traveler around Tallahassee and its environs, I’ve wondered about this “gathering” for years. They sit there as if on the starting line of some long ago race, all lined up waiting for some invisible spandex-clad starlet to throw down her scarf as the signal to go.

After some recent research, I found finally their origins. They are owned by Mr. Homer R. Harvey. He and his father Riley A. Harvey were in the timber, crosstie and turpentine business. They also farmed and raised some cattle and hogs, and the trucks were used in their business operations over the years. Riley died in 1957, and Homer carried the business on into the 1970's. 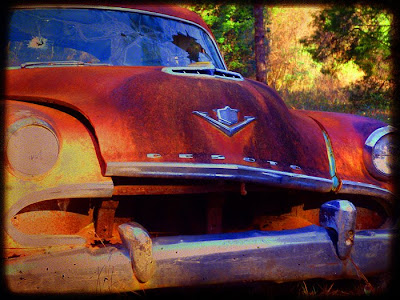 Homer and his wife Yvonne McLaughlin had four children—Pat, Mike, Dennis and Ouida—and Homer raised his family in the home on the curve near the trucks. Pat now lives in the home on “Homer Harvey Curve”. A few years back Pat and Homer decided to move the old trucks out of the woods and place them closer to the road where they are now. Homer is now 92 and lives with his daughter Ouida just a few miles from the curve. Mike and Dennis both live close by.

The woman at the Wakulla County Chamber of Commerce who helped me with the research, Petra Shuff, told me that there’s a ‘54 Ford amongst the gathering that was the first car she remembers steering, sitting in an uncle’s lap. Like Petra’s dream to drive, these old trucks are also a photographer’s dream. I took a series of pictures there recently and played around with a few to great effect, including that ‘54 Ford. Clock’s tickin’, Ms. Petra. Been drivin’ lately?

Email ThisBlogThis!Share to TwitterShare to FacebookShare to Pinterest
Labels: Behind the Camera, Challenges and Swaps

LOVE this!! You're SO talented girl!

congratulations!! this photo is fabulous!! :)

kelly - i'm serious, i'd love to have prints of those, lol.

Please do let us know if you decide to carry prints of these in your Etsy shop. ~Please~
Love them & the fact that you went & researched them makes the images all the richer. xo

My son would have loved these in his younger years--he was crazy for old, rusty cars, trucks and tractors! Great pictures.

Hi Kelly, I stumbled across your website while doing a lampwork search. I too am a jewelry designer (sandpiperjewelrydesigns.com) and was interested in your story. I taught art for about 12 years and then gave it up to do jewelry. I'm currently in the stages of opening up a gallery and studio to sell art and jewelry. Yes, in these unstable times, I'm starting a business! I LOVE your old truck prints. Its funny because I keep thinking about painting a large red truck similiar to these in your photo's. I have a passion for antique cars that I inherited from my mother and father (may they rest in peace). I would love to have a couple of these pics hanging in my gallery! Let me know if you want to sell/show them. I'm in Ohio and my plans for the gallery are to have "area" artists, but I just can't get over the effect that these are having on me :)
I love your jewelry by the way!
Good luck with your medical issues.

thanks for your very sweet comments, nancy! i've sent you a note through your website email address.