Keeping Calm and Carrying On... 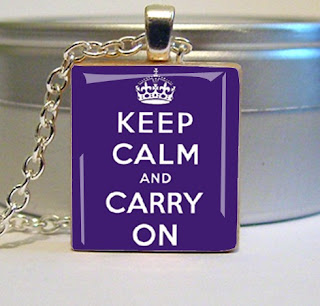 "Keep Calm and Carry On” was used in British propaganda posters during World War II. Given the current state of our world and economy, the phrase and graphic have made a resurgence lately, showing up in various art forms like this pendant found on Etsy. For the past few weeks, it’s also been my personal mantra.

I’ve had three mammograms in the past three weeks and had a biopsy last Thursday. I’m going to be fine; the pathology report deemed the dime size suspicious cluster in my right breast “pre-cancerous”, so while I’m not completely done with visits to the doctor yet, the condition is still very treatable. I know I’m in very good hands, both with the Man upstairs and with my personal doctor. Dr S. has been my OBGYN for years and years and was close friends with my Mom, so I think at times he feels personally responsible for me now that she’s gone. That’s been a blessing because he’s been very thorough and very cautious at the same time, not rushing to unnecessary procedures but at the same time making sure we’re covering all our bases. So it’s been a fairly stressful few weeks, but I have been trying to “Keep Calm and Carry On…”. I have a surgery consult Monday morning.

I wasn’t going to share this you with all as I tend to keep my medical issues to myself, but I got news from a very dear friend yesterday that made me reconsider. My college boyfriend and I are still very close, and he called to check on me yesterday. After I told him where things were, he told me he had some sad news to share. A good friend of his died of a massive heart attack Sunday night. He was 39 years old. Thirty-nine years old… I couldn’t believe it. Stan and Bill had had some fallings out over the past couple years (Stan would now advise you to never buy property with a friend), but thankfully, they had worked through their differences just in the past two months. He was very grateful that he had that opportunity to make peace with him.

Puts things in perspective, doesn’t it? My friend Cathy shared some good wisdom with me. She said “Sometimes the messages sent from the Universe show up in the body, little knocks getting louder ’til the door is banged down. ” I know I tend to run full-throttle, all pistons pushed to the max most of the time. I’m not very good at slowing down, never have been, and I totally suck at just “doing nothing”. Yet, all I’ve wanted to do for the past three weeks is curl up on the couch with my babies and do just that: nothing but cuddle up and surround myself with their sweet little hugs and giggles. John Lennon coined the quote “Life is what happens to you while you’re too busy making other plans.” Don’t let that happen to you. Don’t let life pass you by while you’re too busy doing other things. Slow down. Hug your babies. Kiss your spouse. Call that old friend you haven’t taken the time to talk to in a while. Remember to live in the moment, and milk it for all its worth, for you never know what life is going to bring you next.
at February 11, 2009

I cannot add a thing - well said!! You are in my thoughts and prayers. xxooxxxoo

there you go again, making me cry! you're so good at reminding us to remember the small things...thanks! i'm praying for you too!

Having a hard time putting my thoughts into words, but you know I know first hand what you are saying.

Wow... I can just see you with those baby girls... yes hold them... and know you are lifted up as well.

Damn those mammograms! I'm so glad you caught it.. and that you are in good hands.. but crap that's a lot of weight to carry around....

God bless you with wisdom & peace that will carry you through this time. Thanks for sharing. xoxoxo

thanks for sharing this with us, kelly. sometimes we're forced to slow down and try to put life back into perspective...and focus on the important stuff! you're in my thoughts and prayers...please keep us posted.

thanks for the credit, i'm just glad to pass it along and that you found it useful.

my full-throttle is about the 10th of your throttle! i have my son S to thank for slowing me down.

love on those girls a lot!

I didn't know that's where that saying came from! I love those. I so sorry to hear of your troubles. My heart goes out to you and I will keep you in my prayers.

My prayers are with you. Sometimes it is so hard to slow down, but you're right, enjoy life to the fullest. God Bless you and your family.

I just want to say you are in my thoughts and prayers - your strength and confidence just shine through - thanks for sharing so much of yourself - take care and keep us updated!!!
hugs--Ellie

I'm hugging my babies as I type... and I'll be sure to kiss my hubs when he gets home. Its amazing how quickly life can change... not always for the better. {hugs} to you and I'm so glad you are in good hands! Good luck and all my thoughts and well wishes are headed your way!!