Here's my entry for this week's Creative Construction Weekly Creativity Challenge with the prompt "Memories of Mom". 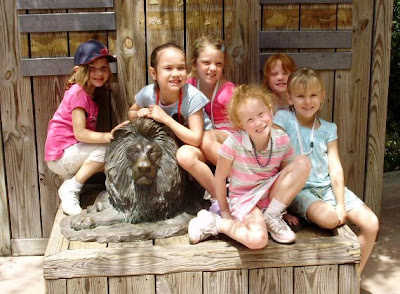 When I snapped this picture of my girls and their friends on a recent field trip at the zoo, another picture immediately popped in my head. In my memory, that picture was of my mom and a group of her friends sitting outside their high school. Sometimes Sarah looks so much like my mom as a child, it’s scary. I searched for the picture for days, knowing that I wanted to compare the two, and when I finally found it, I realized it wasn’t of Mom and her friends. It was of Nana and her friends! In my search, however, I came across another group picture of Mom that I don’t ever recall seeing before. It’s funny how a simple picture can tell so many stories and bring back so many memories, while at the same time leave you with so many unanswered questions. 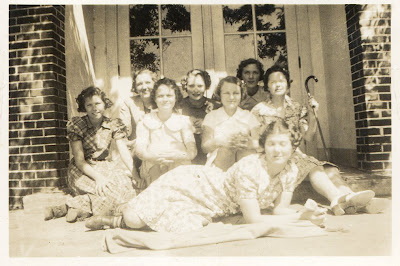 Nana looks to be about 14 or 15 in her picture (above); there’s no date on the back, just “Wimauma High School” in her handwriting. She’s on the far left, looking much like me, actually. She would have been 15 in 1941, four years before Mom was born. What was her life like at 15 in the small town of Wimauma, just outside of Tampa, Florida? Had she met my Granddaddy yet? It looks to be summer in the picture, so Pearl Harbor still sat peacefully shining in the Hawaiian sun. How did she feel when the calendar turned to December 7, 1941? She had three sisters and a brother. Did Uncle Oscar go off to war? He was older than she, so I can only assume he did. He died before I was born (one of our more colorful family stories as I understand he was murdered running moonshine), but I have many memories of Nana’s sisters, particularly Aunt Livy, my Olivia’s namesake. At 88 this August, Aunt Livy is my oldest living relative. I look forward to spending some time with her this summer hearing all the stories of her youth…stories I didn’t think to ask Nana about before she sunk heavily into Alzheimer’s. Nana died just three weeks after my girls were born, yet if Alzheimer’s can leave you a gift (with a little help from God), it did. When Aunt Livy went to see her shortly before she died, she told Nana Sarah and Olivia had arrived. Nana’s response? “Yes, I saw them. They have the most beautiful red hair.” She had never seen them. Memories of grandchildren she never met in life…. 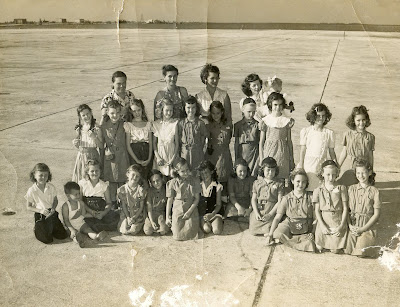 Mom’s group picture is stamped on the back: Girl Scouts, March 12, 1953—Released Official Naval Photograph—If Published Credit Line Must Read “Official U.S. Navy Photograph”. (There’s your credit, Navy.) Mom (middle row, fourth from left) was eight years old. Sarah’s little face peeking out from 1953... I guess I never really knew Mom was a Girl Scout, but it does make sense since she encouraged me to be one. I started out in Brownies and worked on up through the Cadet ranks in high school. What was Mom’s life like in 1953? She was born in Key West, where this photo was taken on the tarmac at the base where my Granddaddy was stationed and spent a good part of his military career until he and Nana were transferred to Naval Air Station Jacksonville in 1969. Mom grew up on that Key West base and met my dad while she was in nursing school in Miami. I can only imagine what life was like on a tiny little island, the southernmost place in the country, on a Navy base. I’ve learned bits and pieces of my mom’s childhood, primarily from Aunt Livy and her son/my cousin Ray, who grew up with Mom in Key West. Mom died way too young so I didn’t get to hear all those stories from her.
I learn my family’s memories through pictures like these….a guesstimation of memories I suppose since I’ve learned so little of the real thing. One of the side effects to being a child of so many divorces? Perhaps. You don’t talk too much about family history when your own history as you are living it is so hard to understand. The upside to this is that I can make those memories whatever I dream them to be. I can make my Nana a wonderful story teller and adventurous soul, as I’ve always guessed her to be by the humor she shared while I was growing up…even in the stories she created while living with Alzheimer’s. And I can imagine my Mom as a free-spirited little girl running around with her arms flying like the airplanes she must have seen landing and taking off daily on that base, surrounded by friends and laughing. Always laughing. And I can learn from them, and use them to create memories for my own children. And my girls will remember adventure. And they will remember laughter. And they will read my stories of them to their red-headed children, creating for them memories of their moms.
at May 13, 2009

Email ThisBlogThis!Share to TwitterShare to FacebookShare to Pinterest
Labels: Behind the Camera, Challenges and Swaps, My Favorite Posts

What a great story! And I'm sure you will make wonderful memories for your girls - stories, pictures and a little magic.

wonderful photos, great memories! i, too, ask myself many of the same questions about my relatives, wondering what their lives were like during what we would consider a "much simpler time". i enjoyed reading about your family, kelly! :)