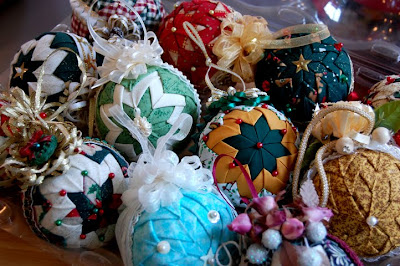 Well, let’s just say I now have a huge new appreciation for the three dozen Christmas balls I have of my grandmother’s. These are what we learned to make this weekend. Nana and Aunt Livy used to make them by the dozens, as evidenced by this picture of one tray of Aunt Livy’s creations (above). And now after lots of cutting, many fights with a rotary cutter, one nasty cut on my finger from said rotary cutter, and one very numb index finger from pushing in all those pins (oh, nearly 200 per ball), I know how to make them. This week anyway! I think I need to make one a week to fully etch the process into my brain. 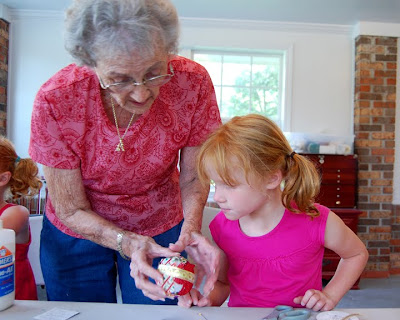 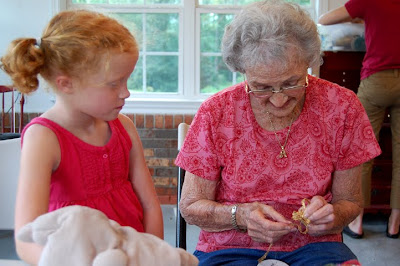 These balls are 3”. For a 3” ball, you need 42 2 ½” squares of fabric. Aunt Livy cuts her fabric by hand, but my cousin Susan showed me her “short cut” for cutting them with a rotary cutter. Susan made it look so easy, Kim and I figured we’d just get up the next morning and whip those squares out in about 15 minutes. Yeah right. Apparently mastering the rotary cutter without slicing off your finger takes years of practice. It took us nearly an hour to cut enough fabric for one little ball. Then came all that folding and pinning and pinning and folding and folding and tucking. And then there’s that little trick to get them all lined up so they meet in the middle. I, at least, added a little to the method there. I decided to rotate from side to side and then work towards the middle from both sides instead of doing one side and then the other. We managed to finish two balls before our pin-pushing fingers gave out. We did the first in traditional Christmas-color fabric that Aunt Livy had already cut for us, and then our second in our more colorful fabric we brought with us. 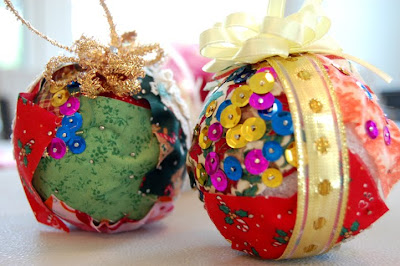 Learning the process itself really wasn’t the treat though. Learning the process from Aunt Livy was the important part. She really enjoyed walking us through each step, so encouraging, while helping me and Kim juggle keeping the girls entertained making their own versions of the balls, above. Though I think they probably could have handled the folding, the rest was far beyond what their little fingers can do at six years old. (My creations below) 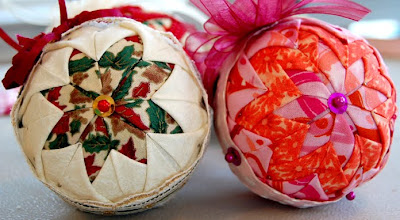 This was a long drive, but well worth it. I try to make it up to see Aunt Livy once a year around her birthday, and each year I leave with tears in my eyes praying I’ll have the chance again the next year. She’s pretty darn healthy for an 88-year-old, and she decided to move into an assisted living facility last month. She said she wanted to do it while the choice was still hers, not when Ray or Darlene (her children) were forced to make the choice for her, and though I see a little wistfulness in her gaze, I think she’s at peace with her choice. I hope I’m that strong when I’m 88 years old, and I hope my girls remember this day. (Kim's creations below..that one with the green and coral is my favorite of all of ours.) 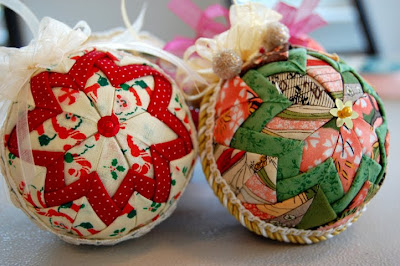 The green and pink one is my favorite too!

These look so intricate. You can tell a lot of hard work and care went into them.

What a fantastic family tradition. I couldn't wait for you to show us what you girls would be learning!

These are fabulous. Does this process have a name?

beautiful. the balls and the appreciation of your aunt.

my mother used to take craft classes a lot when i was a kid in the 70's. one was for these balls. i don't think she every made another, so i can appreciate your hard work for a little piece of beauty.

beautiful ornaments, kelly! how wonderful to have some time with your aunt....that photo of your daughter watching your aunt is precious! :)

These are just beautiful! All of you girls did a fantastic job.