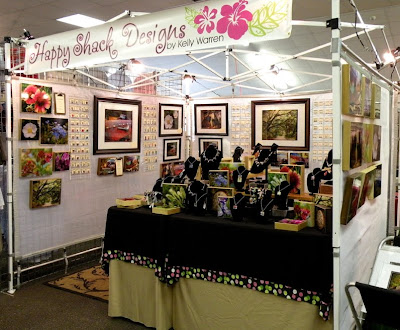 So, see that booth? Yeah, that one up there, and down there? (You can click on the photos to enlarge them.) Holy cow, I must have been out of practice and out of sorts and out of something because it took me nearly FIVE HOURS to set up my Market Days booth…by myself! Now I will say, Market Days is a difficult set up to begin with because you have to dolly from your vehicle outside the building to your booth spot inside the building, and I had the good luck to be right smack dab in the middle of Building 4. Then once you get your booth set, you have to figure out how to rig your lights. But once I was set up, Building 4 and Building 2 were the two best spots to be because those two buildings are insulated! It was cold last weekend (for North Florida anyway!) and the buildings have no heat! But once you added lots of bodies to the insulated interiors of Buildings 2 and 4, the temperature was just right.

Overall it was a good show. My sales weren’t quite as high as they were last year, but given the economy, that was to be expected. Market Days does a phenomenal advertising job and has a great early bird program Saturday morning (gates opened for those with early bird tickets at 8am), so things were really hopping on Saturday all the way up to about 3pm…when everyone went home to watch the Florida/Alabama game. This is the South, after all. You could have heard a pin drop in there by that 4pm kickoff. Sunday was a bit slower, but still fairly steady. 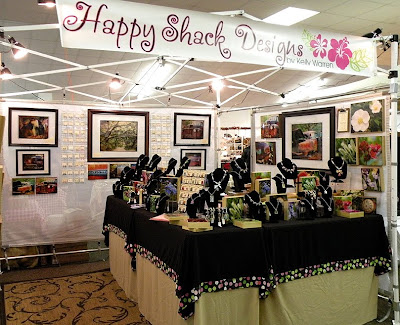 The guys behind me, Mickey and Jeff, were a lot of fun…two good old Southern boys from Thomasville, Georgia, selling pecan and peanut brittle made from Mickey’s grandmother’s recipe. Good Lord, that stuff was good! Mickey’s family just recently sold the company to a production company in Minnesota, so there you had two good old Southern boys selling brittle made from Grandmother’s recipe but produced in Minnesota! A little convoluted, but they just about sold out, and they had boxes upon boxes upon boxes of the stuff. I told them my father-in-law made chocolate covered peanut and pecan brittle that was absolutely to D-I-E for (DH and I call it crack because it’s so addicting), and their eyes lit up like they just might have to have that production company add a little chocolate to a few batches. We’ll see what they show up with next year!

Market Days wraps up my shows for the year. Next stop will actually be back in Tallahassee in late March for Springtime Tallahassee. In the meantime, I’ll get caught up on my website and spend some good time just playing around and enjoying the creative process. After all, I still need to get ready for Artful Journey in February! And then for the first Purple Cottage retreat with Carmen in May! Yay!

Oh my gosh.....there you are! How exciting. I would have loved to have tried that chocolate covered peanut/pecan brittle! Kelly, you're creative path is inspiring to us all.

my mouth is watering...my mother always made christmas pecan fudge.

Can I ask the obvious question? How do you manage to do this, work at what sounds like a challenging career, and hold down a household that includes a set of twins? Do you ever sleep? The booth looks absolutely lovely!

I love your banner!! The booth looks great - makes me wish I was going to a show this year too.

thanks everyone! and karen, to answer your question, i definitely don't do it very often! :-) and i'm just a little crazy.

Oh my goodness, your booth looks fantastic!! I wish I could have seen it in person!