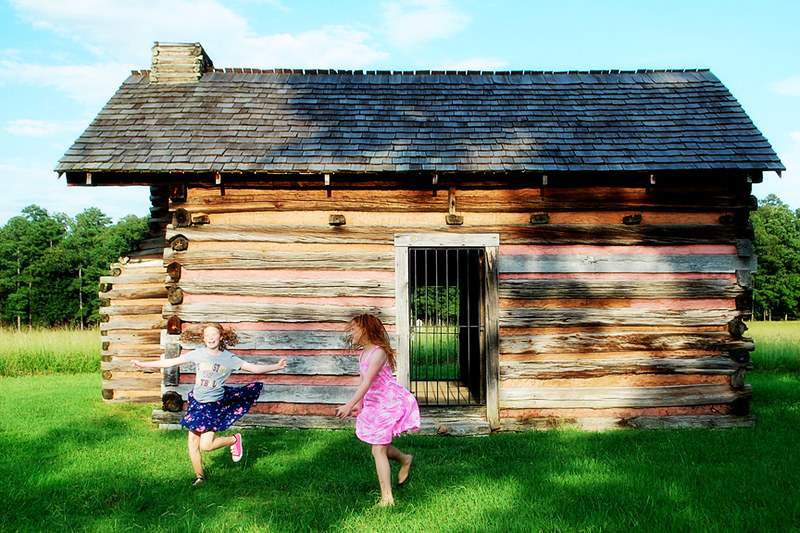 Poignant: that is the word that popped in my head when I thought back on this series of photos last night.  The American Heritage dictionary defines poignant as "profoundly moving; touching: a poignant memory."  Given the news and silly story I shared with you Saturday, that's such a fitting description of this series of photos, the girls twirling in front of the Kelly House on the Chickamauga battlefield, taken during our visit with Aunt Livy about two weeks ago.

We've visited my Aunt Livy in far north Georgia, just south of Chattanooga, the second or third week of August in celebration of her birthday for the past eight years.  Prior to that, Aunt Livy was in the Tallahassee area, so I was able to see her more frequently.  Her death has left me aching.  I should have been better prepared.  She was 92, after all.  But somehow, I just knew she was going to make it to 100.  She told me so.  Since she died in her sleep the night of her 92nd birthday, I guess she thought 92 was just right instead.  I doubt we will visit this area again; though they're all good memories made there, I think being there and not seeing her will be awfully hard. Poignant memories.

It's been fascinating watching how the girls are processing this. Olivia, Aunt Livy's namesake, has been crying at the drop of a hat just like I have.  I'll start tearing up again, causing her to start crying again. Or she'll start tearing up again, causing me to start crying again.  Sarah, on the other hand, has not shed a tear that I'm aware of.  But what she has done has been incredibly touching.  She's taken care of me and Livvie.  After I told the girls about her death Saturday afternoon, Livvie curled up in a ball on the couch and cried.  I layed down with her, and we stayed that way for nearly three hours. During those three hours, Sarah brought us Tink (most definitely Livvie's cat), Elmo (Livvie's favorite lovey), and for me, Bunny. Yes, Sarah gave me her precious Bunny to snuggle with.  She covered us up with one of the throws on the couch. She then went downstairs and went to work in my studio, making necklace after necklace for us in hopes that would help us feel better.

Livvie really didn't leave my side much until I dropped them off at school this morning.  At dinner Saturday night, she brought a very small, old doll to the table with her, one of my childhood toys. She said it reminded her of Aunt Livy, so she wanted to make it our Aunt Livy doll. She's kept it with her ever since. She slept with me Saturday night, and while she was taking a shower with me yesterday, she asked me about the funeral we will be going to Thursday.  What should she wear?  What shoes should she wear?  This is truly the first family death they have experienced. And I guess maybe since Olivia was named after Aunt Livy, she felt a stronger bond to her than Sarah did. I learn more and more about these wonderful girls every day.  I'm so thankful that Aunt Livy got to know them and they her. I was so blessed to have her in my life all these 47 years.
at August 26, 2013

Kelly I'm so sorry for your loss. Just reading about it here. Your aunt Livy sounds like she was an amazing woman. My Nana passed on her 89th birthday. For some reason that makes me feel like it was definitely her time to go and makes it a little easier. The hurt will last for awhile but just go with it and keep her memory alive through your daughters. Sending you hugs and love.