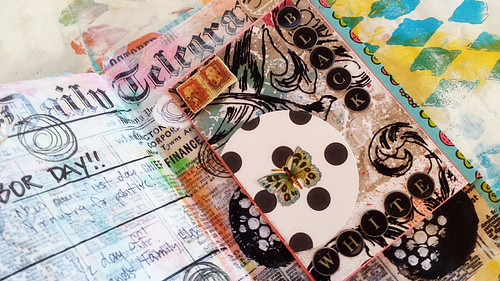 It's getting harder and harder to photograph this book because it's so thick!  I may have to go back to scanning!  Week 36's challenge for the Documented Life Project was black and white.  What immediately came to mind was that old kid's riddle: "What's black and white and red all over?"  "The newspaper!"  Ba da boom.  The last time we went to the Irish pub up in Fernandina Beach, they had the coolest serving basket liners.  They were this newspaper printed deli paper.  So of course, I asked our waiter if I could have a few sheets, and he gave me about 50! 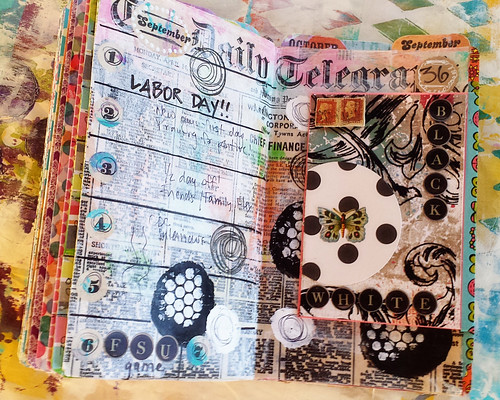 I've stuck notes from the week inside the envelope. It was initially red, so I covered it with various pieces of scrapbook paper that included black and white.  On the calendar spread, I started by gluing in the deli paper and then gave it a light smattering of white gesso. The large black dots are black paint on which I used some punchinella to add smaller white dots. I added a few smaller white circles with some scribbles and called it done!  See more of my Documented Life posts here; follow along with the whole project (free!) on the Art to the 5th blog here.
at October 09, 2014