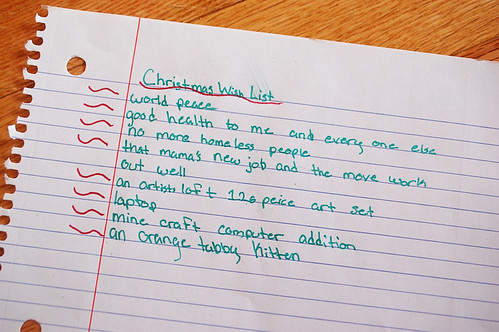 I found this on Sarah's desk Monday night and absolutely love her list.  Santa's already taken care of items five and six, and item seven will be an easy addition to item six.  Item eight?  Well, given that we already have two new furry feline additions to the family in Spartacus Pete and Zoey, I don't think adding in one more at this time is the right time, but who knows.  If a sweet little orange tabby were to show up at our doorstep late one night, I'm sure we wouldn't turn him away!

It's items one through four on this list that really struck me, particularly item four.  Oh, my sweet child.  While items one through three, though heartfelt, might set her up for the pageant set (um, no...), it's four that tugged at my heartstrings: "that mama's new job and the move work out well."  I'm on the road to Tallahassee this morning to "officially" start this new job, and yes, I'm very excited.  Professionally, I know it's going to be a great new challenge for me, and I feel very up to the task.  The mama side of me still struggles with uprooting my family for this move, but we're going on faith that we're being led where we are meant to be led.  Though nervous, or nervous-cited as Sarah likes to say (that's nervous and excited combined!), we are getting ready for our new adventure!
at December 03, 2014