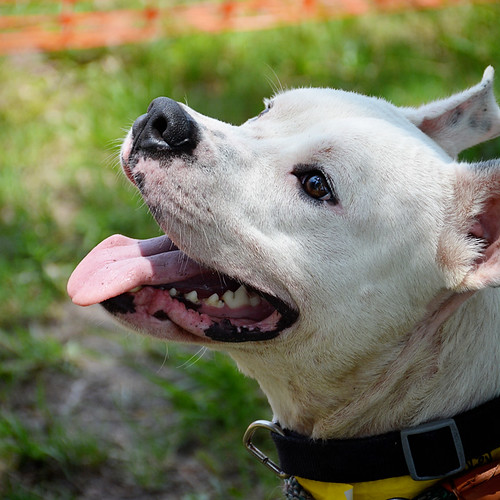 This past weekend, First Coast No More Homeless Pets held another of our MEGA Adoption Events. These quarterly events have the goal of finding 1,000 cats, dogs, kittens and puppies homes in one three day span. Area shelters and rescues all come together at the Jacksonville Fairgrounds. We didn't quite hit 1,000, but 830 dogs and cats are sleeping in new homes this week. For the December MEGA, I went in early on the first day and photographed the load in. Imagine the logistical planning involved in getting hundreds of dogs and cats to one location! At the last one in April, I focused on getting one specific dog adopted, Zoe; unfortunately, I failed, but Zoe was thankfully adopted soon after MEGA.

This time, we were in the throes of packing for our move all weekend, so I didn't get to spend as much time helping at MEGA as I would have liked to, but after following along on Facebook Friday and Saturday, I couldn't stand it any more and went in for a few hours on Sunday. This sweet boy is Mikey. I photographed him at my last photo session and learned he is a ball dog extraordinaire. We played ball last Sunday for a good 30 minutes! Every time I threw the ball, he happily fetched and brought it right back to me to throw again. He's a ball catching superstar. I was sad to see that he hadn't gotten adopted yet when I arrived yesterday morning, so I took him out and spent some time with him. After helping one dog get adopted, Donald, I walked quite a few others and saw that Jennie was taking Mikey back out so I walked out and captured these shots of him. He just looks so stinkin' happy, waiting to catch his ball. Mikey didn't get adopted this weekend, but I do have some good news for him.  He went to the TAILS program! I can't wait to hear his TAILS success stories. (Read more about TAILS here.)

All MEGAs are both physically and emotionally draining, but this one was particularly bittersweet for me. While I was sitting on the floor with Donald waiting for his family to complete their paperwork, our shelter manager Jen mentioned my impending move, but she said she also felt certain she'd see me at least four times a year to come back over and help for MEGA. I certainly plan to pop back into the shelter for more than just the quarterly MEGA events though. As I shared in this post, this shelter has most definitely grabbed a hold of my heart for the long run. We "officially" move the weekend of August 7, but I'm hoping I can squeeze in at least one more visit to the shelter before we go.
at July 20, 2015