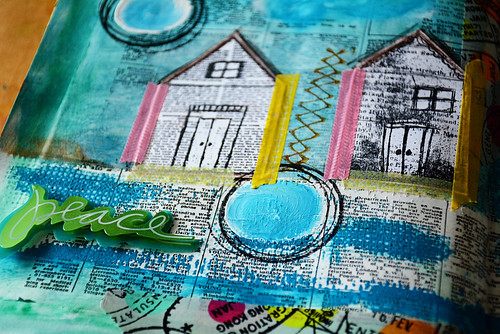 No, that's not a typo. It really does say 2015 up there in the title. I've been working through the Documented Life Project 2016: The UnPlanner pretty steady but haven't shared any photos yet. And then I realized I still haven't finished the Documented Life Project 2015 (I'm a chronic late project finisher...but I always do my best to eventually finish what I start!).  When I pulled this journal back out, I remembered how much of a love/hate relationship I had with the size (9 x 12 for a single page or 12 x 18 for a double spread like I'm doing them), but now that I'm back to working smaller for 2016, I kinda like the larger size!  I'll work to finish this one by the end of 2016 and then hopefully have two finished projects done at the same time before I start 2017. 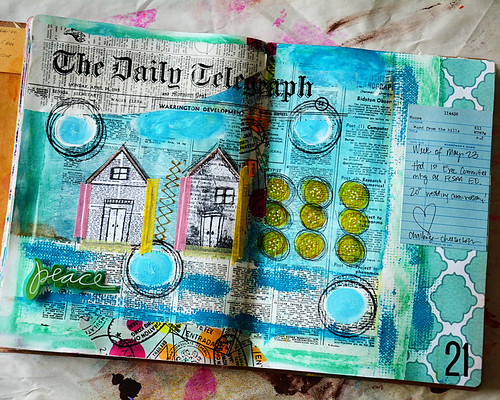 This is week 21 from 2015. The challenge was cheesecloth, which I incorporated near the bottom under the houses. Though I actually used drywall tape instead of cheesecloth. :-) When in doubt or without, improvise with what you have! That Daily Telegraph up at the top and all the text in the background is actually deli paper from a restaurant up in Fernandina. When the waiter brought me my lunch, I liked the deli paper so much, I asked him if I could have some and he brought me a whole stack (though I'll admit he looked at me a bit strangely...)  I'll continue to share 2015 pages as I finish them and start sharing 2016 pages.  To see more of my 2015 Documented Life Project spreads, click here.  The 2014 Documented Life Project was the first and my favorite so far. Click here to see those.
at June 10, 2016