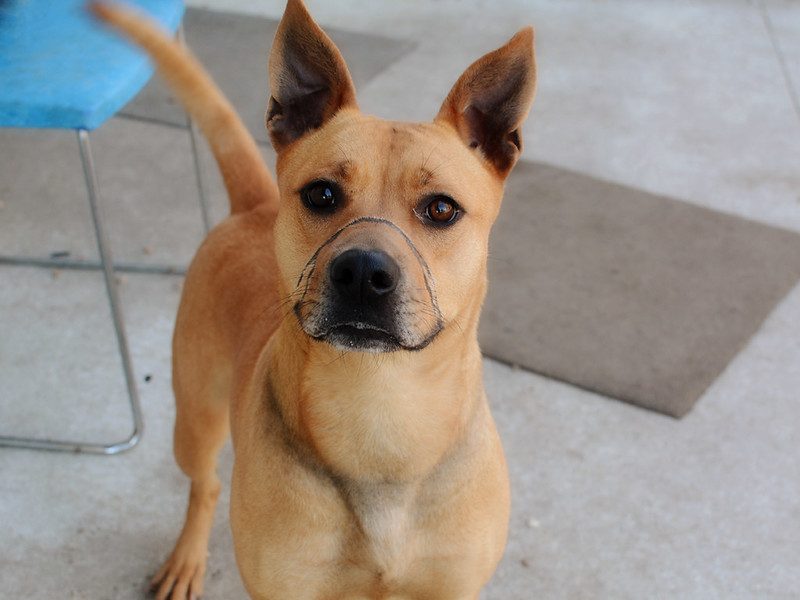 I spent two solid days at Jacksonville's Animal Care and Protective Services while we were home for Spring Break last week, photographing 58 dogs, 58 reasons to adopt a shelter pet.  Instead of sharing all 58 photos here, I'll just send you over to my Flickr album where I post all my Jacksonville shelter shots so you can see them there and just share this one with you. Visit the full album here. (Take some time! Those faces will suck you in for hours, and I've photographed more than 1,700 of them for this shelter alone! :-)

People who don't volunteer at an animal shelter often ask how we do it. And as I've said here before, some days, it is definitely hard, and, yes, some days your heart does get broken. But the love you get back from spending time with these animals makes it worth it. This girl is named Summer Love, and she really touched my heart this week. I saw her when I was in the shelter photographing last Monday, but she had already been outside by the time I got in. I noticed the markings on her snout then, but I didn't look closely enough and thought it was a muzzle. Well, Tuesday I took her out. It was not a muzzle. It appears this girl had spent quite a bit of time with her snout tied up with rope...rubber bands...something. Yep, I said tied up, as in tied shut. And yet, here she was, with her sweet face and soulful eyes. This shelter staff helped her heal from whatever way she came in, and look at her now. She's friendly, affectionate, and playful.

You often see the results of the worst of people in an animal shelter, like whoever did this to this dog. This week, I also saw what appeared to be wounds healing from bullet holes and cigarette burns and ears that had been severely chopped off. So many people--keyboard warriors primarily--often attack open admission, municipal animal shelters. They either complain that the shelter won't immediately come get a dog they see as abandoned or dangerous, won't let people just drop off their dogs willy nilly to the shelter without a specific process to follow, complain about the shelter not spending enough time rehabilitating every single animal that comes through their doors, get all up in arms about an animal being euthanized, but then get all up in arms again about an animal they deem as dangerous being adopted out. Do you see the never ending circle here?

But then, if you just take a little time, step in and volunteer, then you can often see the results of the best of people...like the ones who got this girl back to the happy girl she is now. Jacksonville's Animal Care and Protective Services staff and volunteers are some of the very best people I have the honor of knowing, and I'm thankful every day that they have the heart to do what they do for dogs like this one and so many more. As of this writing, Summer Love is still available for adoption at Jacksonville's Animal Care and Protective Services.
at March 19, 2018