If you live here in Jacksonville, you're well aware of the recent fire at the Jacksonville Humane Society. In total, 80 animals survived the fire (68 dogs and puppies and 12 cats and kittens) plus another 25 that were in foster homes at the time. Sadly, 85 perished (67 cats and kittens and 18 dogs and puppies). My initial post about the fire is below, April 9. Since then, I've been following the story of one very lucky cat. He reminded me of that Lucky Duck I wrote about in February here. 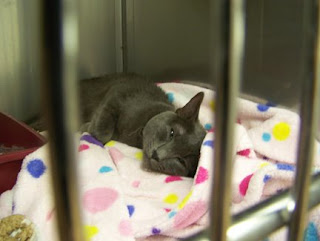 This cat was found in the rubble the Monday after the fire as workers and staff came to recover whatever they could. They had completed their search for the day but then returned to an interior room to search the rubble one more time for four animals whose kennel was found open, but remained unaccounted for. Although they made an attempt to shovel through the debris on the floor, there was just too much of it to move and sift through, so they gave up. Remarkably, as they were leaving the room, a slight movement caught their eye and they found a live adult cat who somehow managed to survive the blaze. The cat was immediately rushed to the Animal ER on Southside Boulevard. He had burns on his foot pads and remained on oxygen most of the night, but otherwise looked like he was going to be okay. Tuesday, he was back at the JHS clinic and was doing well. Where the cat emerged from they'll never know. But finding him was the best way to end what was otherwise a traumatic day for the staff - and most likely a sign that it was time for one of them to adopt a cat! Important to note....as unbelievable as it may seem, the name on this cat's identification collar was "Lucky."

Well, it seems Lucky is now going to be famous. He and a couple JHS staffers flew to New York City yesterday to appear on the Rachael Ray Show. The episode will air sometime around Mother's Day. 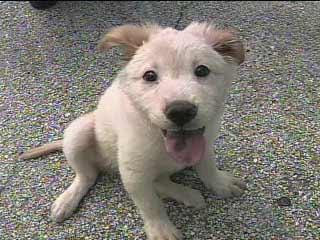 Another famous pooch who escaped the fire is a little puppy rescued, and then adopted by, firefighters at Station 28. This puppy, as you might guess, has also been named Lucky. It appears he has a whole family of happy new dads! You can read more about him here. The Humane Society is still in need of your donations and support. Visit their website here for more information. They are holding a memorial service for all the animals lost in the fire at the Humane Society Pet Cemetary Saturday, April 21, at 11:30am.

I know that many people may feel that in light of the more recent tradegy at Virginia Tech, the fire at the Humane Society is small potatoes, since no human lives were lost. I certainly agree that the tradegy at Virginia Tech is the most horrific example of senseless loss of life our country has seen since 9-11, and even more hard to understand and accept given that it was carried out by the hand of a fellow student. Yet for those who work with these animals and all the animal lovers who've worked to support their efforts, this fire is also an incredibly sad story. I hope that the stories of these two lucky survivors brightens your day just a little bit.