Mix It Up Monday: Mermaids Spray Paint and Stencils 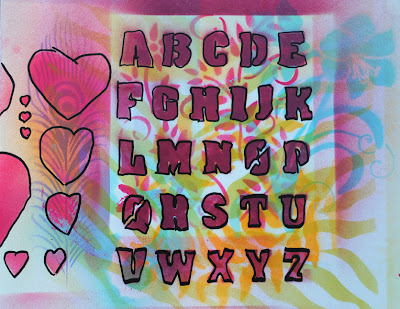 I’m finally weeding through all the Mermaids and Mamas pictures and getting ready to write the wrap up post, but I wanted to share a few things from my girls with you. Sunday morning as a wrap up, we do a “show and tell,” letting all of the girls take center stage one by one, sharing all the art they created over the weekend and telling everyone what their favorite activity was. To a one, the favorite was the spray painting with stencils. I learned this technique from my artsy friend Martha Lever, and I became instantly addicted! It was so much fun to watch the Mermaids do it!

These two pieces are Sarah’s and Olivia’s spray paint stencil art. Since they’d had some practice at home, they did a little better than most of the girls, but everyone had such a great time, I don’t they think they really cared how they looked in the end. To make a spray painting spot for us, my trusty assistant Whitney taped down two large plastic table cloths under the pavillion walkway so we’d be in the shade but still have some airflow to keep the fumes at bay. We left everything there to dry, and then about lunch time, a huge storm came in! Whitney ran over and at least grabbed all the art so we were able to salvage that, but the girls had a great time later picking stencils out of the woods. The rain was very heavy and blowing sideways, but at least all my stencils survived! Thanks for the inspiration, Martha! 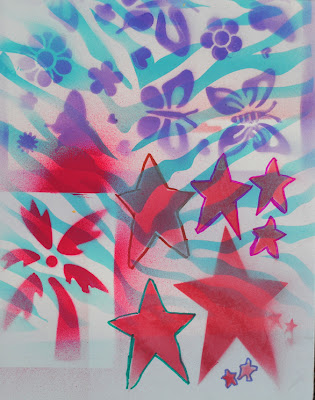 Email ThisBlogThis!Share to TwitterShare to FacebookShare to Pinterest
Labels: Budding Artists, mermaids and mamas, Mix It Up Monday

I love how brave your girls are at just putting their art out there....I have so much to learn...I'm too critical of my art and want it to be perfect. :-)

Art is not supposed to be perfect, Whitney! At least that's what I keep telling myself. Mine certainly isn't! :-)