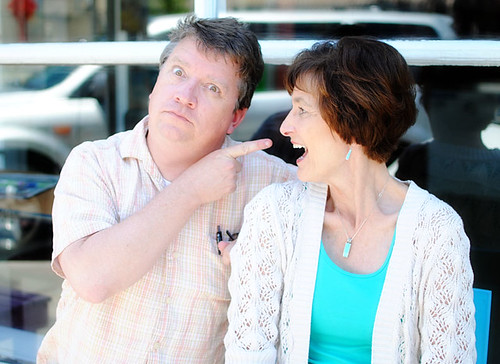 Meet Ian and Harolyn, two of my favorite people. I've know Ian for years. He's been involved in theater in Jacksonville for many, many years, and we first met when he was teaching some acting classes on campus about 15 or so years ago. He's an immensely talented actor and playwright, and as you may have guessed from this photo, pretty hilarious. One of his one man shows is titled "Eb Scrooge: A Southern Fried Christmas Carole." That should give you a pretty good idea of his sense of humor! His most recent Jacksonville project is Swamp Radio, a very cool live radio/variety show experience that travels through the region.  He lives most of the time in the NYC area now, furthering his acting and play writing career, but we are happy to have him back in town when we can.

Harolyn is a speech professor on campus and is also very involved in theater in Jacksonville. A very talented actor herself, Harolyn and I have worked together on several theater-oriented projects on campus, and she's a lovely person to work with. Harolyn was the artistic director of the Shelby County Community Theater in Kentucky for many years and then also did demonstration lessons with students and coached elementary and middle school teachers on how to infuse drama into core classes as a learning opportunity for the Galef Institute before joining us here at the college six years ago. Our most recent project included her portrayal of the poet Emily Dickinson in a one-woman show complemented by student poetry and artwork with a nature theme.  It was a great learning community that brought together three disciplines:  performing arts, visual arts, and literary arts.

I had the pleasure of having lunch with these two last week at Mojo No. 4, Urban BBQ Whiskey Bar in the Avondale area of Jacksonville. Great name for a restaurant, huh? Since I had to go back to work, I couldn't partake of the whiskey part, but the BBQ and fried pickles were mighty tasty. Ian has some ideas to beef up the visibility of the college's performing arts projects in the neighborhood, thereby gaining some opportunities to bring the neighborhood back to campus with us.  We'll be getting together again when Ian makes it back to town and see what happens. I'm looking forward to some fun times ahead with these two!  Sadly, I've never been able to live my dream of performing in musical theater on Broadway (that'll happen when you never even take a theater class), so I get to do things with these two to vicariously keep the dream alive. :-) 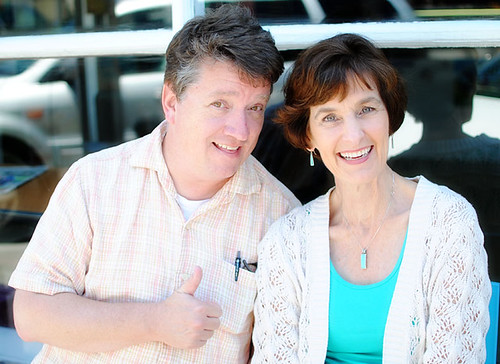