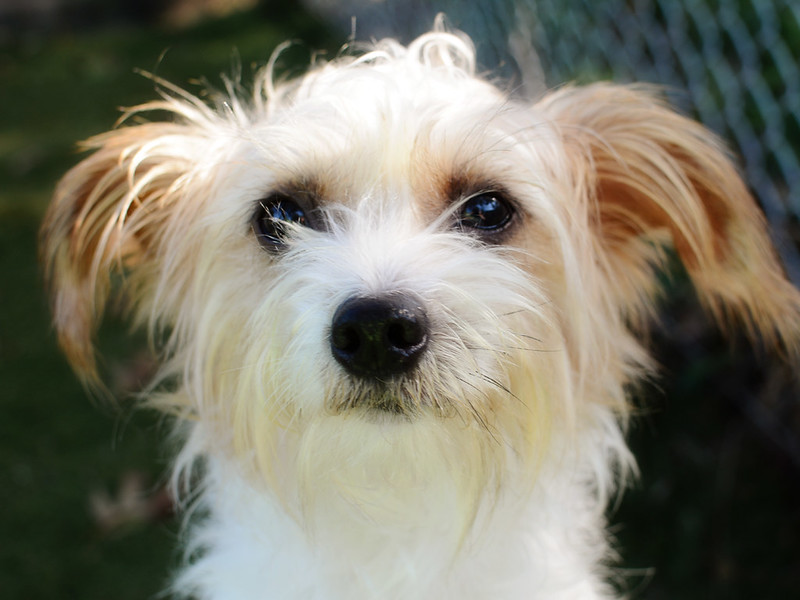 So, this is Scruffy. I've shared the anatomy of a shelter shoot before here. Sometimes, though, I meet those dogs that just don't fit into my standard practices of getting happy faces! This guy was one of them. He's a scruffy little terrier, thus his name, and he didn't even much want to come out of his kennel...unless I carried him. Then he was perfectly happy to be carried around like a prince.

Once we were outside in the play yard, he explored a little bit, but he did not venture far from me. I've mentioned velcro dogs before, like Scarlett here. Well Scruffy brought that to a whole new level. He refused to let me photograph him unless he was actually sitting on top of me. Thus, this close up! This shot is not cropped. I use a 35mm prime lens at the shelter, and he was actually this close! I was sitting down on my knees, leaning back as far as I could, while Scruffy was actually on my knees. Not an easy angle! Little fellas like him are adopted quickly, and sure enough, he was adopted shortly after I took his photo.  Adopt your new best friend from your area animal shelter today!
at October 23, 2018

He sure was, Peggy! Thanks for stepping in today!