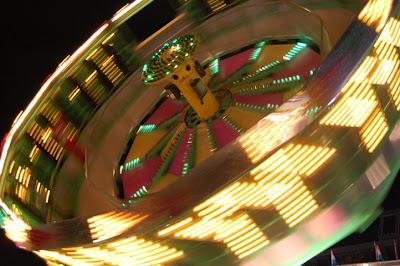 Have I told you I bring the moniker “Dizzy Blonde” to a new level? Yep, I’m officially a medically diagnosed Dizzy Blonde. Now this has nothing to do with my brain, as far as ditzyness goes anyway (though I have been accused of being a space cadet at times…). Nope, this is plain old anatomy and physiology, though I guess in some ways it is brain-related. Right after the girls were born I started having major, fall down on the floor and can’t hold my head up vertigo spells. Really nasty stuff. The first one happened when the girls were about eight weeks old and I was home alone with them. Very scary day. After stumbling my way to the bathroom to pray to the porcelain god, I managed to get to the phone to call DH and tell him to hurry home while the room spun around me. I then spent the next 24 hours in the hospital. Vertigo’s one of those “sometimes we have no idea what causes it” things. So after about three years, several doctors and two brain scan MRIs later, I finally ended up at the Mayo Clinic Hearing and Balance Center here in Jacksonville last fall. After about 10 questions and one very entertaining demonstration where I was asked to close my eyes and march in place for 60 counts (I ended up facing the opposite direction and on the far side of the room, thinking I was still standing in the same spot), I realized I finally found the right doctor. When she said, “So, do you get nauseous when you scroll up or down on the computer?” “OMG!!!!! YES!!!” (I realized this may come as a big surprise to those of you who know how much time I spend on the computer.) Then she said, “Aren’t you glad you finally found the right place! You aren’t crazy after all!” Yeah! 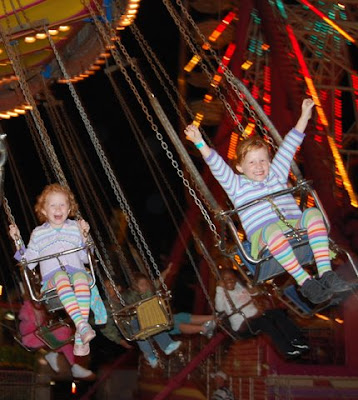 Now that I had found the right doctor, the next week the real fun began. I had two full days of tests to try to determine what was causing my spins. Let me just say two words: rotator chair. I’ll spare you the details of all the tests and just tell you that they split them up into two days for a reason. Because they have to bring on the vertigo to determine what’s happening to me while I’m in the spins, there was a heck of a lot of spinning going on in those two days…which translated to a heck of a lot of, you know, that porcelain god worship stuff. All in all, even though I couldn’t hold food down for about three days, it was a totally fascinating experience. Once the computer spit out the tallied results of all my testing, we learned that I had lost nearly 70% of my balance function in my left ear and about 35% in my right ear (which I guess explains why I always spin to the left and tend to misjudge corners on the left, constantly banging my left shoulder and left thigh on walls and corners of counters…and DH always said it was just my natural clumsiness…humph!) The probable cause? Years of inner ear infections; I remember having them from childhood all the way through college and beyond. Fixable? No. Treatable, somewhat. 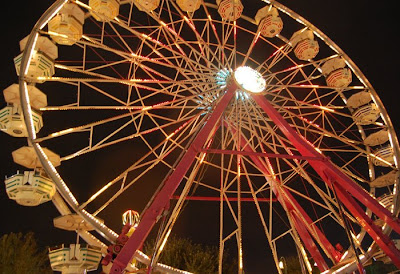 It took them about three months to get me on the right dosage of the medicine (Klonopin, a drug which I recently learned is highly sought after on college campuses for reasons very different than the treatment of vertigo, and to think, I get it for $4 a bottle!), so since March I’ve been doing fairly well. I still have occasional vertigo spells but they are not nearly as severe as they used to be. So, here’s the next chapter in the saga! Brooks Rehab just opened a Balance Center conveniently in the same building and on the same floor as the Mayo Clinic balance center. When I went in for my six-month check up last month, my doc decided I should give Brooks’ vestibular rehab therapy program a shot (Google vestibular rehab therapy; that’s what I had to do). Last week was my first appointment, primarily an evaluative get-to-know-you session with my lovely therapist Ann. Yesterday was my second appointment. No easy evaluative stuff this time, more like the beginnings of the torture I now see in my future. After some basic stuff where I’m sure I just looked rather clownish because I have very little balance when I close my eyes and Ann made me close my eyes and do all sorts of stuff, she put me in this voting booth-like contraption. Picture a large 3-sided, walled booth with a landscape scene painted on it. Now, take into consideration that not only does this landscape scene move toward you and away from you as well as side to side, but the floor you are standing on also rocks in all different directions. Now come on! This would make the average person hurl, wouldn’t it? So what the heck do you think it’s going to do to someone who already has issues!? Geez! Anywho, my job was to focus on the little blue man in the little red box on the computer panel directly in front of me and do my best to keep him in the little red box while the walls and floor moved in various directions. (You dizzy yet? Here, pop a Klonopin; it’ll settle you down…and put you to sleep…) Mama was not happy with the little blue man. So then to make it even more interesting, Ann told me to close my eyes and try to keep my balance as best I could as she moved the walls and the floors. Close my eyes? I’m still nauseous. And this is supposed to help me how? 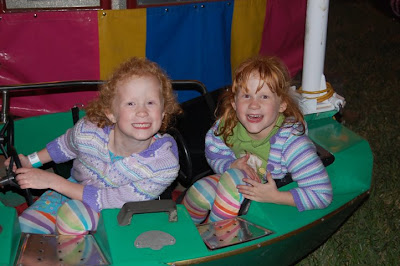 Ann tells me each week will get more “challenging”. How do you define “challenging” here? So back to the title of this post: Things Mama Can’t Do Anymore. Nope, can’t ride all those fun rides at the fair anymore. We went recently and I thought that maybe I could at least ride the Ferris Wheel with the girls, but no dice. DH would not let me get on it. And as soon as it started moving and I tried to follow the carriage DH and the girls were in with my eyes, I realized he was right (I really hate it when that happens.) So while DH and the girls got to play on the rides, I played with my camera. Got some cools shots, don’t you think? Click on them to enlarge. I used to love that ride where you stand up in that circle thingy and then the circle thingy starts spinning, and then it starts turning on its side and continues spinning, pinning you up against the wall from the sheer velocity. You know, the one in the top picture? Dang I miss that thing… Short of the pinning you up against the wall from the sheer velocity part, it now reminds me somewhat of that darn rotator chair! What are your favorite memories of the fair?

That's really fascinating, Kelly. I had constant ear infections as a kid, and now I find I tend to list sidways and bump into all manner of things on my right side. No vertigo, though, thankfully. I hope you continue to make improvements and that someday another ferris wheel ride is in your future.

Hi Kelly,
this was very interesting - thanks for sharing your story. I've had some vertigo the past several years & it comes on with no warning. My usual trigger is height with nothing visible beside me (like being on the roof) or stairs or the top of escalator (just watch the lady standing there trying to get on - oh, that's me). Working on our house this summer was challenging at times. At the beginning I couldn't stay on the scaffolding, but by the end of the summer I was up 2 levels of scaffolding & on a ladder on top of it. Sometimes I'd be on the ladder helping hubby hold on to something while my eyes were closed and I clung to the ladder with my free hand. As for carnival rides - well, I haven't done them for years except for a ferris wheel of the style you pictured here. Good luck with your therapy.

hhhmmm...kelly, you gotta stop this! i list to the right have infrequent dizzy spells and run into door frames all the time. more and more alike! but at least something can be done! i'll have to look into it. btw, i went on those chain swings w/s at busch gardens this summer. yikes! and they seemed so harmless. i loved the spinny thing as a kid, too.

WOW - that is absolutely wild - I am so sorry you have suffered from vertigo that badly - but I am happy you finally found a doctor that could help you - that just stuns me...sorry you cannot enjoy the rides but the pics are awesome!!
Take Care of you!!! Those gorgeous red heads need you to keep taking pics - lol
hugs--Ellie

Oh Kelly I'm so sorry you are going through this! and only after the children were born? Our bodies are such puzzles aren't they? I deal with crippling migraines and they often come with vertigo that leaves me clinging to the sofa (because it feels like I could fall off!) gah! I hope you find the medicines!