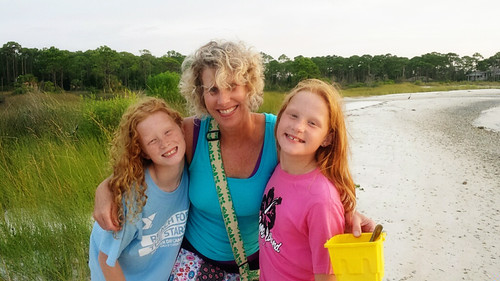 Since the girls were born, we've spent the second or third week of August visiting my Great Aunt Livy for her birthday. Aunt Livy passed peacefully in her sleep on the night of her 92nd birthday last summer, so we decided it was important to create a new tradition to celebrate her. Now, we'll spend that week on St. George Island, where we took this picture. I'm grateful that I have a friend who owns a lovely little cottage on St. George Island!

These past few weeks have definitely been ones of new adventures.  My blog absence has been due to getting the girls (and me!) ready for middle school!  They started 6th grade last Monday, and it's been quite the challenge for all getting adjusted to the new routine. Not only did the redheads have to make the transition to a new school, they also had to make the transition to riding the bus to school!  Thankfully, I was able to adjust my work schedule so that I can be home with them until the bus comes, though our bus adventure started off on the wrong foot. On the first day, as we stood at the end of our driveway waiting for the bus to stop (we live on a state road, so by law, the bus must stop at our house), the bus just blew right by!  We got in the car and chased the bus down at the next stop, and I had a little chat with the bus driver.  Though she told me we were not on her stop list, I assured her that I had already talked with the transportation department three times over the previous two weeks to ensure that we were, in fact, on her stop list.  When I called the transportation office when I got into work that day, they confirmed that, yes, we were on the list; there must have been a miscommunication with the driver.  Oh well, at least they got that challenge over on the first day, and the bus now stops at our house.

So now, summer's over. (Well, summer isn't really over in Florida until sometime in late October, but you get my point.)  It's been a whirlwind and another testament to that old cliche of time passing so quickly while your kids are growing up.  We're settling into our Fall routine, hoping for a little bit of cooler weather and getting ready for football season!
at August 25, 2014

Email ThisBlogThis!Share to TwitterShare to FacebookShare to Pinterest
Labels: Behind the Camera, best shot monday