It's the Little Things... 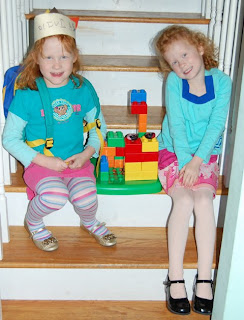 I’ve had this Thanksgiving week off, trying to take care of a few things around the house, doing a little shopping and preparing for my next show. I was in JCPenney’s Tuesday, digging through a pile of jeans in my never-ending quest to find a pair that’s long enough, when a complete stranger paid me a compliment. He was a very handsome fellow, about 6’3”; I had noticed him near the jewelry counter when I walked by there a few minutes earlier (being 5’10” myself, I can’t help but notice tall men). Moments later there he was standing next to me while was I sitting on my knees digging through yet another stack. He said, “I just wanted to tell you that short, curly hair cut is exceptional on you. Your husband is a very lucky man.” Exceptional! I grinned with all I had, said thank you very much, and he walked away leaving me there stunned, a pile of jeans in my lap. Exceptional? I had not done a thing to my hair that morning, just got out of the shower and let it dry by itself, thinking I really needed to find time for a hair cut; I walked out the door with a wet head and minimal makeup. I was wearing an old pink Old Navy t-shirt, beat up old jeans, and 10-year-old Doc Martens. Why do I tell you this? Sure the comment was incredibly flattering, but that’s not my point. My point revolves more around the beat up old jeans, messy hair and minimal makeup. 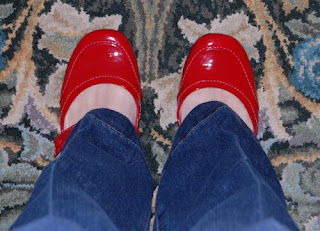 Yesterday, the girls and I went out shopping. I still didn’t dry my hair, but I did put on a little more makeup, a nicer t-shirt and jeans, and my shiny new red patent leather Mary Janes. The girls, however… The girls are dressing themselves these days. (Click on photo above to enlarge for full effect.) They haven’t really learned the whole “matching” concept yet. I guess as Stacy and Clinton say: “It doesn’t have to match! It just has to go!” Whatever… But it was that compliment I received that made me say, “What the heck, you guys look fabulous, let’s go.” Because it really doesn’t matter what you wear, does it? 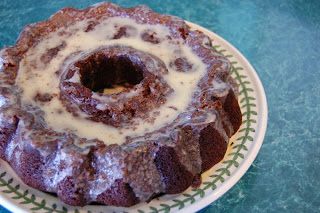 So as part of our Thanksgiving prep last night, the girls and I, with a little unnecessary help from DH, made a cake, my Chocolate Orange Cream Cheese Pound cake. Now mind you, DH is definitely the cook in this house, but bake he does not. I’m the pastry chef/cake baker extraordinaire. The girls helped measure and dump all the ingredients into the bowl, with a little splash and dump here and there from DH. We popped it in the oven and then got the girls in bed while it baked. Sixty-three minutes later I pulled it out, and it looked and smelled scrumptous. I went downstairs to crank out another bracelet while it cooled, and when I came back upstairs to take it out of the pan, I discovered it had sunk. And I mean really sunk. It must have been that extra two splashes of orange juice DH threw in there in his “more is better” philosophy. So again, I decided appearances are not everything. I popped that baby right out of the pan and slapped it on a plate. This morning, the girls and I made the icing (Fresh Orange Drizzle) and poured it all over the top. As you can see, it’s not the prettiest cake, but I can assure you now that I’ve sampled a little piece, it’s divine. 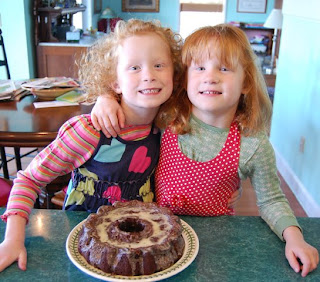 So it’s really the little things that matter, isn’t it? That man didn’t have to take the time to say something to me (yeah, yeah, I know you cynics out there are saying he just wanted to get in my pants—same thing DH said), but he did take the time, and in doing that, he really made my day. And when the girls appeared in their carefully chosen outfits that really didn’t match, that didn’t matter either, did it? To them, they looked like the little fashion divas they are, and it was more important that I let them pick out what they wanted to wear than worry about what other people thought about how I dressed my children. And that cake? Who cares what it looked like?! Once it hits the tongue, the appearance is irrelevant, right? It’s about all taste! So I hope you are enjoying your Thanksgiving, not worrying about what you're wearing, how your hair looks, or whether or not your relatives think your cornbread dressing is up to snuff. It’s the little things that really matter anyway. Make some memories. And wear fun shoes. Who cares whether they match or not?
at November 27, 2008

Absolutely! They are adorable, and I would gladly eat that cake...Happy Thanksgiving!

So true, Kelly! Thanks for the little reminder of what should matter and what should not. BTW - Your girls are really starting to look like young ladies instead of little girls. I sure hope DH is saving up his money for that double wedding they'll have someday, LOL.

I hope your holiday was filled with overflowing blessings and much love!!!
the girls are just so beautiful!!
hugs from my home to yours!!
-Ellie

before our festivities really began, i said, i guess i should go dry my hair an put on some makeup. my dh's visiting aunt said, you don't need to, just be yourself. i said, thanks, but myself wants a little perking up today. i didn't, and the day was still fun, full of food and family.

What a great article to read, have to love that!

Goodness your little ones are growing fast! They look so proud of the cake :)

And Kelly, I say you strike me as all around exceptional lady! I'm glad you are having a nice break from work!

yes!
you are exactly right!

Could we possibly get the recipe for that cake? :0)